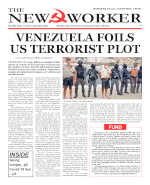 Boris Johnson is being unusually modest these day. Not surprising given that we have the highest coronavirus death toll in Europe and the second worst in the world.
Mark you, Johnson has little to fear from the new Labour leader. Sir Keir Starmer bleats on about bringing the country together to deal with the national crisis when he should be taking up the health workers’ demands for protective clothing and the unions’ calls for job security when the shut-down ends.
Starmer congratulates Boris Johnson on the birth of his son whilst his minions work to ensure that one of their own becomes Labour’s general secretary following the resignation of Jenny Formby.
Starmer’s followers say their leader is a great orator who trumps Johnson in parliamentary debate. But it cuts no ice on the street. The Starmer ‘bounce’ the Blairites said would happen when Jeremy Corbyn stepped down hasn’t happened. According to the latest opinion poll, 48 per cent of people would rather Boris Johnson was at the helm during this crisis, only a mere 19 per cent were in favour of the Labour leader.
The bourgeoisie, of course, don’t want debate to go beyond the issues in which they themselves have differing opinions. Our task is to make the case for socialism.
Everyone knows that Britain is an immensely wealthy country and that the economic basis for socialism has existed here for over a hundred years. But we are no nearer to socialism than we were in the 1900s. The fact is that the working class is still committed to social democratic reform. This is not because the class is collectively stupid but because they know, quite correctly, that the ruling class could restore the entire public sector and the entire Welfare State and more by simply disgorging a fraction of the profits they make; and because they believe, erroneously, that fundamental and permanent changes in favour of the working class can be won through parliamentary elections.
Bourgeois elections, when they are held, are used so that the smallest number of people can manipulate the largest number of votes. But that doesn’t mean that we turn our back on workers’ demands for social justice. Class collaborationist ideas of social democracy can be defeated – but they cannot be defeated by imitating them in the countless variations of the {British Road to Socialism} upheld by the revisionist, pseudo-communist and Trotskyist movements in Britain today.
The fact that these platforms do not work, that they are rejected time and time again by the same working class these programmes claim to advance, never deters these fake-lefters who believe they can change the consciousness of the masses through rhetoric and wild promises.
We can all play that game and conjure up imaginary legions to take us down the revolutionary road. We can all invent a class that is seething with anger and mobilised for revolutionary change, and which is just waiting for the correct party with the correct formula to lead them to victory. But we have to work with the working class that exists and not the phantom of romantic ultra-leftism.
The NCP’s electoral policy is to vote Labour in all elections apart from the bogus European parliamentary polls, which we boycott. It’s not because we think a Labour government can solve the problems of working people. We know that isn’t possible in a bourgeois ‘democracy’. Our policy is based on the concrete conditions that exist in Britain today.
In our view, a Labour government tied to the unions and the co-operative movement offers the best option for the working class in the era of bourgeois parliamentary democracy.
Our strategy is for working-class unity. We must fight to defeat the right-wing and to strengthen the left and progressive forces within the labour movement, to create a democratic Labour Party that will carry out the demands of organised labour when in office.
Posted by london communists at 1:39 AM