May Day – A Day for the Workers! 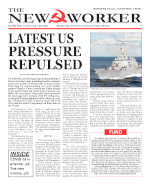 Although the origins of May Day go back to hallowed antiquity when it was a festival for the ancient gods, it has also always been a day for working people. On May Day we remember those dark days of old when workers fought against grasping employers who would have them work all day, every day but Sunday, for a miserable pittance of a wage.
We recall the struggle for the eight-hour day and the strikes in the USA and Canada called on May Day 1886 that ended in the murder of six strikers by the police in Chicago, and the deaths of seven police the next day when a bomb exploded during a protest in the city’s Haymarket Square. Eight trade union leaders were arrested on trumped-up charges and four were hanged in Illinois in 1887.
In 1889 the First International, the International Working Men’s Association, declared May Day an international working-class holiday to commemorate the Haymarket Martyrs, and the Red Flag, representing the blood of working class martyrs – the martyred dead of Labour’s anthem – was adopted as the international symbol of working people.
From the big parades and marches in the people’s democracies to the street meetings and rallies in Europe and throughout the Third World, May Day is celebrated to honour the generations that have gone before us and to look to the future with confidence and determination. But this year the celebrations are muted as the shadow of the coronavirus plague hovers across the globe.
Whilst we celebrate May Day in our hearts we also remember the tens of thousands who have needlessly died in the pandemic due to the criminal neglect of the health service by Tory and Tory-led governments in recent years.
Now everyone across the parliamentary spectrum claims to champion the NHS. “Lessons have been learnt” they say, along with lavish promises of more money to come for the health service when the crisis is over. But when that time comes it will be business as usual as far as the bourgeoisie are concerned. There’ll be nothing on the table for the NHS, nor the health service workers who keep it going, without mass pressure on the streets and from the unions.
Although a recent opinion poll shows growing support for rent controls, job guarantees and public ownership of key services, this has not been reflected in the stance of the new Labour leader, Sir Keir Starmer, who rarely strays from the Blairite agenda and the Remainer-wing of the bourgeoisie that still thinks it can use these troubled times to scupper Brexit.
Though Starmer has highlighted the scandalously high COVID-19 death-rate amongst the elderly, which he rightly links to a lack of personal protective clothing in care homes, his more vocal supporters would rather concentrate on calling for a lockdown exit plan and an extension of the Brexit transition period beyond the end of this year.
We can only wind down the lockdown when the danger is over. This must be left to the medical experts and the unions to decide. Stringent health and safety norms must be in place before any return to work. The job retention scheme must be prolonged and extended. Sick pay and unemployment benefits must be raised, and the Government must ban zero-hours contracts, tackle false self-employment, and guarantee all workers day-one employment rights. And that’s just the start.
The ruling class is brutal and oppressive because that’s the only way it can ensure that the rich can continue to live the lives of Roman emperors on the backs of the workers and peasants they exploit. They fear and loath organised labour because they know that the entire wealth of the world comes from workers in the factories and peasants in the fields.
They fear the spirit of May Day because it represents the unity of working people that sooner or later will sweep the whole rotting system to the oblivion it richly deserves.
Posted by london communists at 2:51 AM