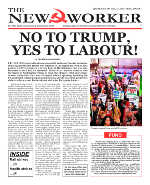 We will be voting in an election next week that will be decisive for the future of our country. A massive vote for Labour can stop austerity in its tracks. A Corbyn government will stop an American take-over of the NHS. Labour will restore key parts of the public sector that were criminally sold-off in the Thatcher era, support industrial development and create new jobs to end the unemployment and destitution that has blighted the lives of so many working class families in recent years.
The alternative? Five more years of Tory misrule. Five more years of bread-line wages. Five more years of austerity and pay curbs to ensure that the rich can continue to live their worthless lives in the manner they’ve long been accustomed to.
The Tories dream of making Britain the “Singapore of Europe” – a spivs’ paradise for the money-launderers, drug-lords and oligarchs who have already turned London into a millionaires’ playground.
Labour promises to bring in a new, green industrial revolution; rebuild our public services and tackle poverty and inequality. For the many. Not the few.
But it’s also a climate election, an investment election, an NHS election, a living standards election, an education election, a poverty election, a fair taxes election. Above all, it’s the change election.
The Tories wanted the December poll to revolve around Brexit and Boris Johnson’s withdrawal agreement which is just another version of the May plan that was repeatedly rejected by the old parliament. Johnson wants to swap the Treaty of Rome with a new ‘Treaty of Washington’ that would allow the big American pharmaceutical corporations to plunder the health service in return for cheap food imports that we could get from America anytime on “no deal” World Trade Organisation terms.
While totally rejecting the proposed new trade agreement with US imperialism Labour’s stand on Europe has tilted more to the Remainer camp with a promise for a “second referendum”. But we must remember that most class battles are won in the field of struggle and not in parliamentary debate. The struggle outside parliament, which is a bourgeois institution, will be far more decisive than the struggle inside the House of Commons.
The battle to leave the European Union has still to be won in the big unions that still largely follow the social-democratic sell-out merchants in Brussels and the rest of Western Europe. The only way we can secure a genuine Brexit is to win the argument in the labour movement and that is yet to come.
The hidden hand of the Establishment, that reflects the dominant Europhile wing of the ruling class, is working to produce another hung parliament and a “national government” or Labour-led coalition that will do little apart from hold another referendum in conditions set by the Remainers themselves.
We don’t want a Labour administration that’s been pawned to the Scottish nationalists and the Liberal Democrats. We don’t want a ‘people’s vote’. We want a people’s government for social justice and an end to austerity. Vote Labour on 12th December!

Posted by london communists at 2:11 PM