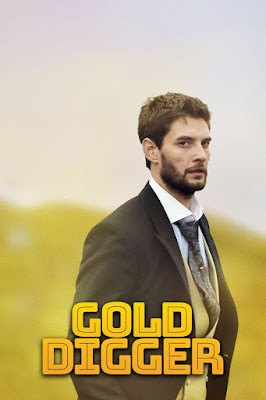 A woman views exhibits in a museum and strikes up a conversation with a man. After some passionate sex scenes, they fall in love and he proposes. There is a 30-year age gap however, Ben Barnes (played by Benjamin Greene) is in his early 30s whilst Julia Day (played by Julia Ormond) has just turned 60. We are continually asking is this for real or is Ben simply a gold-digger?
Julia is extremely wealthy. If you propose to someone 30 years older what you are asking is “will you spend the rest of your life with me?” as opposed to “shall we spend the rest of our lives together?” Meanwhile very little is actually known about Ben, who is reluctant to show Julia where he lives.
The relationship exposes problems within Julia’s family. Her daughter Della (played by Jemima Rooper), whose life is a car-crash waiting to happen, is rather uninterested. Her older son Patrick (played by Sebastian Armesto) tries to check Ben out and finds nothing obviously suspect. Patrick’s life is also a mess; his business is experiencing problems as is his marriage and he is on the verge of an affair with a work colleague. Her youngest son Leo (played by Archie Renaux), who has most to , is an archetypal mummy’s boy who in his early 20s still needs his bed made for him. Julia’s ex-husband Ted (played by Alex Jennings) becomes increasingly jealous and uses Leo as a tool to undermine the relationship whereas Ted’s partner Marsha, who is Julia’s former best friend (played by Nikki Amuka-Bird), actively encourage the relationship.  Ted and Julia’s marriage ended as a result of Ted’s adultery with Marsha, who sees the relationship as a way to re-build her friendship with Julia.
Initially I saw the series as a second-rate drama about an older woman and her toy-boy. In a scene when Julia and Ben wander round a trendy London market, she buys him an expensive watch in the way ordinary folk might buy and an ice-cream. Is there, however, more to the story?
I know only a few New Worker readers, although in all likelihood you are not in the top five per cent of earners. But the latter, who are by definition a minority group, tend to feature rather a lot in BBC dramas. Do the bourgeoisie live more interesting lives than the rest of us?
The drama is about modern-day bourgeois angst. They do have things to be anxious about; namely Brexit and the prospect of a Corbyn Government. Brexit, although not a threat on its own, will mean a degree of reorganisation for a number of businesses and the uncertainty around it is causing more problems than the event itself. This is shown in the problems faced by Patrick’s company; equally this could be an issue with businesses that don’t make anything nor provide a useful service.
The relationship between Ted and Leo is one of classic upper-class manipulation. Ted manipulates Leo in the same way a ruling-class demagogue manipulates a misinformed section of the population. Ted’s willingness to jeopardise his marriage to the much younger Marsha shows how a section of the ruling class may abandon their interests to maintain a hegemony over a section of the population. Let’s hope in the years to come that we can give the ruling class more to be anxious about than their mother’s toy boy.
Posted by london communists at 1:53 PM