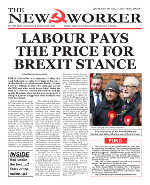 The Tory victory bodes ill for the working class. Five more years of Tory rule means five more years of bread-line wages. Five more years of austerity and pay curbs to ensure that the rich can continue to live the lives of Roman emperors on the backs of the millions upon millions of working people they exploit at home and abroad.
They’re going to have a good Christmas drinking themselves silly dreaming of making Britain the ‘Singapore of Europe’ – a spivs’ paradise for the money-launderers, drug-lords and oligarchs who have already turned London into a millionaires’ playground.
Labour didn’t lose because its manifesto was too left-wing. It lost because millions of working people who voted for Brexit in 2016 were not prepared to support Labour’s new Remainer stance that the Blairites had been calling for in the first place.
Ian Lavery, the national Chair of the Labour Party, rightly says: "The fact we went for a second referendum is the real issue in the Labour Party, it's about a lack of trust.”
Within the labour movement the blame game has already begun. The right wing say it’s all Jeremy Corbyn’s fault in a call to return to Blairite policies that have brought poverty and destitution to Greece and France and many other parts of the European Union  that we will now leave within the next few months. Or will we?
Boris Johnson’s withdrawal plan is clearly a form of Brexit but nobody knows what the outcome of the follow-up negotiations with the EU will be. If it is anything like what Mrs May’s deal envisaged then Britain will still remain tied to Brussels institutions for many years to come. It is equally clear that Johnson wants to replace the Treaty of Rome with a new ‘Treaty of Washington’ that would allow the big American pharmaceutical corporations to plunder the health service in return for cheap food imports that we could get from America anytime on ‘No deal’ World Trade Organisation (WTO) terms.
Even though the election was a disaster for Labour, we must remember that most class battles are won in the field of struggle and not in parliamentary debate. The struggle outside parliament, which is a bourgeois institution, will be far more decisive than the struggle inside the House of Commons.
The Blairites are bleating that Corbyn lost the election. But they’re the ones who sabotaged Labour’s campaign and it’s their failed Remainer policy that sank Labour’s hopes in its traditional northern strongholds. It’s Labour’s fifth column, which also includes the pseudo-left who told us to “Remain and Reform” and that “Another Europe is Possible”, that ultimately destroyed Labour’s chances in the general election.
Bourgeois democracy is democracy for the exploiters and dictatorship for the exploited. Bourgeois elections are used so that the smallest number of people can manipulate the largest number of votes.
The New Communist Party (NCP) has never confused the Labour Party with a revolutionary party, nor imagined that we can overthrow the bourgeoisie through parliamentary elections. But we believe that a Labour government, with its organisational links with the trade unions and the co-operative movement, offers the best option for the working class in the era of bourgeois parliamentary democracy.
Our strategy is for working-class unity, and our campaigns are focused on defeating the right-wing and strengthening the left within the labour movement. Our party came into being out of the struggle against revisionism, to serve the interests of the working class. We shall not be diverted from that. We know that social democracy, of whatever trend, can never lead to socialism. But the struggles of the future can only come from a labour movement confident to lead the struggle for revolutionary change.
Posted by london communists at 9:39 AM