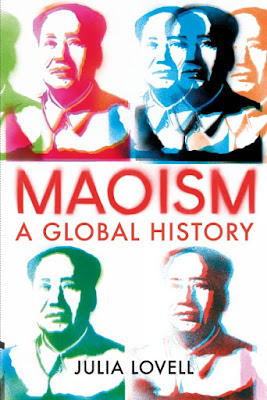 In September 1993 I caught an early coach to London to join a protest against the arrest of a Peruvian guerrilla leader.  In 1970 a seven-year-old boy in a Scottish prep-school asked the Chinese embassy for literature to enable him to start a Cultural Revolution at his school.. What links these events is the movement known as Maoism.  In her book Julia Lovell charts its history.
Maoism is broadly defined as a variant of Marxism that places greater emphasis on the peasantry.  Regular Marxist-Leninists see this class as equal to the industrial working-class; whilst Trotskyists tend to be dismissive of it and the author shows a degree of ignorance when she uses the term ‘lumpen-proletariat’ in reference to the rural poor.  It also places specific emphasis on anti-imperialism whilst its supporters in the west tend to focus on oppressed groups such as ethnic minorities and those outside the official labour movement.
Meanwhile Maoism is accused of supporting cult-like veneration of the leader although the same accusation was made against Soviet Union under Stalin.  Lovell argues that the distinct features of Maoism originate in the violent suppression of the Chinese Communist Party and labour movement in 1927.The brutality of these events led to Chinese Communist Party’s emphasis on armed struggle over trade unionism.
Much of the book focuses on Maoism outside of China; covering the Korean War, the tragic events in Indonesia in 1966, the Vietnam war and the horrors of Pol Pot.  It should be pointed out that the Vietnamese leader Ho Chi Minh was not a Maoist and that Vietnam later overthrew the Pol Pot regime in Kampuchea.
It also covers the conflict in Peru in the late 1980s and early 1990s. The guerrilla leader mentioned earlier was Abimael Guzman leader of the Shining Path. Guzman is now in a Peruvian jail. The seven-year-old boy was Andrew Marr who is now a mainstream journalist and television presenter.
A chapter on Maoism in the West explains how it influenced the anti-war and civil-rights protests of the 1960s and 70s.  British Maoism, or that section of the Communist movement opposed to Krushchevite revisionism originates from the Committee for the Defeat of Modern Revisionism and Communist Unity founded in 1963 by Michael McCreary.
But the book contains inaccuracies about British Maoism; for instance, it claims that the Communist Party of England (Marxist-Leninist) (CPE-ML) later became the Communist Party of Britain (Marxist-Leninist) (CPB–ML).  The two groups were, in fact,  separate organisations; the CPB-ML, was founded in 1968 by Reg Birch, a maverick member of the old mainstream communist party, while the CPE was established in 1972 to later become  the Revolutionary Communist Party of Britain (Marxist-Leninist) in 1979.
Lovell curiously argues that despite market reforms Maoism still influences Chinese policy citing a change to the Chinese constitution which lifts the limits the Chinese President to two terms in office, arguably making Xi Jinping president for life.  However, China never gave material assistance to most of the movements mentioned.  This was even the case with the Nepalese Maoists who overthrew the Nepalese monarchy in 2007.
She believes that in the light of recent disputes between China and the West (largely provoked by the latter) that our ruling class need to take a new look at Maoism.  The question is should those of us opposed to imperialism also take a look at it?

Posted by london communists at 11:23 AM