The Green Corn Rebellion of August 1917 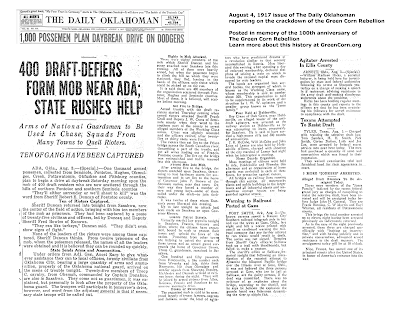 by Chris Mahin
Some would have us believe that the South, the West, and the rural areas of the United States have always been conservative. The month of August contains the anniversary of an event which disproves that claim.
On 2nd August 1917, the Green Corn Rebellion began in Oklahoma. This little-known chapter of US history was an armed rebellion led by impoverished tenant farmers and former railroad workers.
The rebellion took place just weeks after the federal government began military conscription. (The United States entered the First World War on 6th April 1917) While the Green Corn Rebellion included African-Americans and Native Americans, the overwhelming majority of the insurgents were white Southern rural people.

Times were hard in Oklahoma in the early 1900s. After the Civil War ended the “robber barons” made huge fortunes. The expansion of the railroads drove many small farmers into poverty.  Farming in Oklahoma was commercial; tenant farmers were wage labourers. Cotton production doubled between 1909 and 1919, making Oklahoma the fourth-largest cotton producer among the states of the United States.
Over 60 per cent of mortgaged farms were lost to foreclosure during the two years before the Green Corn Rebellion. More than half the farms were worked by tenants. The rates were even higher in the south-eastern Oklahoma counties where the rebellion took place.
Conditions were harsh. Even a grade-school education was rare. People were very poor and always in debt.
Far from being conservatives, the tenant farmers and rural workers of Oklahoma of that time were often very radical. Between 1906 and 1917, the ‘Wobblies’ – the Industrial Workers of the World (IWW), and the Socialist Party recruited many people. In 1914, the Socialist Party had more dues-paying members in Oklahoma than in any other state. (It had 57,000 members in Oklahoma who were organised in 1,500 locals) That year, Oklahoma elected over 100 Socialists to office. In 1914, the Socialist Party candidate for governor won 21 per cent of the vote.
The Green Corn Rebellion was organised by the Working Class Union (WCU). The group’s constitution said that all members of the working class over the age of 18, “regardless of race, sex, colour, or occupation” could join, and that “any means necessary” would be used to better the conditions of the working people. The group’s first demand was for the “total abolition of the crime, disease, and death-producing practice of rent, interest, and profit-taking.”
Even after two of its leaders – “Rube” Munson and Homer Spence – had been indicted for obstructing the draft, the Working Class Union continued to organise in eastern Oklahoma. By midsummer 1917, it had recruited a membership of between 18,000 to 35,000 people. On August 2, the Seminole County sheriff and some deputies set out to investigate alleged radical activities in an area known for its WCU sympathies. The lawmen were ambushed and forced to flee by five black men who were part of the WCU. That evening, the WCU called a secret meeting on a sandbar in the Canadian River.
Munson and Spence – who were free on bail – urged resisters to arm themselves and prepare for a fight. Opposition to the war and the draft had been on the rise since the spring.
On the morning of 3rd August, resisters gathered on a bluff near a farm. (The owner had hoisted the red flag of rebellion above his barn a few days before.) During the night, raiding parties went out to cut telegraph and telephone wires and burn railroad bridges in the area. They also blew up some oil pipelines. Other rebels moved into the poor cotton country south of the Canadian River where they called for armed action against the draft.
The main group of militants on Spears’ Bluff assembled more supporters from the surrounding tenant country. This support included a group of black sharecroppers who were members of the WCU and several Native Americans.
At Spears’ Bluff, “Rube” Munson told the group that other uprisings were taking place and that a large army of Wobblies would march on Washington and put an end to the war and the draft. The Working Class Union should start its own march to Washington and link up with thousands of other farmers and workers.
However, the rebels never started for Washington. After hearing about the insurgents’ activities, a posse of 70 men mobilised and headed for the rebels’ encampment. When the insurgents saw the armed posse moving toward them, they dispersed. “The papers said we were cowards, but we weren’t,” one rebel explained. “Some of the men in the posse were neighbours of ours and we couldn’t shoot ’em down in cold blood. That’s the way we felt ’bout the Germans too. … We didn’t have no quarrel with them at all.”
For the next week, posses hunted down hundreds. They fought several bloody engagements with hold-outs but within days the authorities had crushed the rebellion. Of the 450 men arrested, 150 were convicted.
The rebellion’s leaders were given stiff sentences. Some were not released until a presidential pardon in 1921. The supporters of the war and the enemies of labour blamed the Socialist Party for the rebellion. There were cross-burnings all over the state as the Ku Klux Klan grew.
The attacks on civil liberties in Oklahoma coincided with a nationwide assault on free speech and the labour movement. These attacks destroyed the Socialist Party in Oklahoma and the Industrial Workers of the World throughout the country.
The Green Corn Rebellion has much to teach us. In a time of great turmoil, when the wealth of the country was concentrated in the hands of a tiny group of robber barons, the poor of the South took a stand against economic injustice and a war they felt their country had no business being involved in.
The wisdom of the Green Corn rebels can be seen in the words on one of their posters, found along the country roads in Marshall and Bryan counties: “Now is the time to rebel against the war with Germany, boys. Get together, boys, and don’t go. Rich man’s war. Poor man’s fight. If you don’t go, J P Morgan & Co is lost. Speculation is the only cause of war. Rebel now.”
While the world is very different today than it was in 1917, one thing hasn’t changed: When the United States goes to war, it is still the rich who benefit, and the poor who do the fighting and dying.
Posted by london communists at 11:31 AM