Marx through the eyes of his daughter 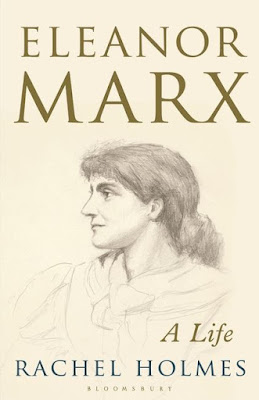 This is part of the history of the Marx family covering contemporary events through the eyes of his youngest daughter and contains plenty of useful information about the 19th Century. It goes into detail about both the Marx and the Westphalen (her mother’s maiden name) families, her parents’ courtship and her father’s friendship with Engels.
Eleanor Marx was born in Soho in 1855; by then her family had settled in London after having fled numerous European cities. From 1848, the Marx family faced permanent exile from Continental Europe after fleeing Paris that year; ironically only a few months earlier they had been welcomed back to the French capital after the overthrow of the King.
Growing up in romantic poverty, the Marx family on the one hand owned a piano (the home entertainment system of its day) whilst having trouble paying household bills. Her father, who briefly worked as a journalist for the New York Herald, was often forced to borrow money to settle his debts.
Holmes has carried out painstaking and detailed research in to the life of the Marx family; although at times I did find the level of detail somewhat intense.
Possibly history’s most famous childminder, her two elder sisters Laura and Jenny both had large families.
The author believes that “Karl Marx was the theory. Eleanor Marx was the practice”. She certainly was a political activist in her own right. She campaigned for Irish freedom, amnesty for the Paris Communards and against British imperialism’s involvement in the Sudan.  Eleanor Marx played a leading role in the British left’s first split when she joined the Socialist League when it broke with the Social Democratic Federation.
The book charts the ups and downs of Eleanor’s personal life. She was initially involved with the Communard Prosper-Olivier Lissagaray and later the prominent secularist Edward Aveling. It was her involvement with Aveling that led, on discovering his marriage to an actress, to her tragic suicide at the age of 43. The book reminds us that Eleanor Marx should be remembered as one of the great women of socialism. Her name belongs with the great women of socialism such as Rosa Luxembourg and Dolores Ibárruri rather than as a character in a cheap Victorian tragedy.
First published in 2014, this book was recently presented to me as a gift. It’s still readily available and well worth a read.
Posted by london communists at 9:04 AM