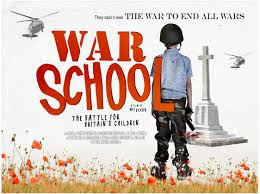 War School is a superb new resource for the peace movement in Britain, which has faced huge challenges since the collapse of the Soviet Union and the virtually endless series of wars involving British forces since 1990.
One statistic quoted in the film sums up the ghastly reality of modern war: in the First World War, 20 per cent of those killed were civilians and 80 per cent were military; in the Second World War it was 50–50;  but in today’s wars, the ratio is 95 per cent civilian, five per cent military.
Described as “a film about the battle for the hearts and minds of Britain’s children”, director and producer Mic Dixon says that: “Faced with unprecedented opposition to its wars, the British government is using a series of new and targeted strategies to promote support for the military.”
The film, produced by POW Productions, warns of what it calls “the increasing militarisation of UK society”, with £100m per year being spent on promotions such as Armed Forces Day, Uniform to Work Day, Camo Day and National Heroes Day.
“In the streets, on television, on the web, at sports events, in schools, advertising and fashion – the military presence in civilian life is on the march. The public and ever younger children are being groomed to collude in the increasing militarisation of UK society.”
War School was released in November 2018, the centenary of the 1918 Armistice, “The War to End All Wars”, and includes veterans of Britain’s recent conflicts describing the reality of war.
We see the army targeting children as young as eight in dozens of school events run by the armed forces, children getting ‘hands on’ with lethal weapons and climbing into military vehicles.
Whilst all these efforts are aimed at glamorising the military and the ‘war heroes’ defending their country, we also hear from members of Veterans for Peace, Forces Watch and Quaker Peace and Social Witness about the reality of war, and the war crimes committed by British and US forces.
Ben Griffin, a former SAS soldier who refused to return to Iraq and is a Veterans for Peace activist, describes the reality of Iraq as “like that scene in the Wizard of Oz where you look behind the curtain and you see it’s pretty shit. When you looked behind the curtain in Iraq, it was really dark.”
Commenting on the Armistice anniversaries marked in schools and workplaces across Britain every year, Griffin says: “I don’t need to be told by the state ‘you will remember this for two minutes’, when I remember it every fucking day.”
His bitterness calls to mind the hundreds of veterans struggling with PTSD [post-traumatic stress disorder], many of whom have seen their families fall apart or ended up sleeping rough, abandoned by the state that no longer needs them.
It must be pointed out however, that whilst it is mistaken to support the military in aggressive imperialist countries such as Britain and the USA, where the lucrative arms business has huge political influence in generating conflict, in socialist countries or countries under attack from imperialism supporting the armed forces is a patriotic duty.
In this respect, the closing credits include footage of Russian soldiers on the 9th May Victory Day parade. In reality, Russia’s foreign actions in Afghanistan and Syria were at the invitation of those countries’ governments, and arguably did not involve indiscriminate killing of civilians, despite the capitalist media’s claims.
Russia’s record certainly bears no comparison to the blood-drenched recent history of Anglo-American imperialism’s wars, coups and regime changes.
The film was shown recently at the excellent Cinema Museum near Elephant and Castle in south London, followed by a discussion with the producer and peace activists.
David Collins, who served in the Royal Marines in Oman, says in the film that no permission was needed “to fire on anyone we liked”, including anyone passing through an all-night ambush – which he described as “legalised murder”.
In the discussion he commented that: “Since the 1990s any meaningful public discussion of wars like the Gulf War, or even any debate, has been blocked.”
War School is a professionally produced, highly watchable documentary that should be seen as soon as possible. Although it is available on the Vimeo platform, it is highly suitable for cinema-style screenings followed by discussion, which can be arranged for £35 via the {War School} website.
{War School} exposes the creeping militarisation of Britain in recent decades, which is for greater than most people realise and poses the urgent question: “Is perpetual war really what we want for future generations?”
Posted by london communists at 10:07 AM