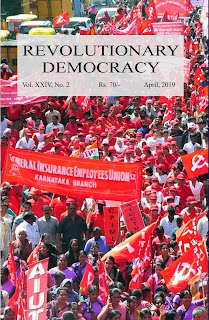 Once again, the twice-yearly Indian Marxist-Leninist has arrived from New Delhi to these shores and is available for purchase for a very reasonable sum.
The usual mixture of articles on contemporary Indian politics, contemporary events from around the globe from parties associated with the International Conference of Marxist-Leninist Parties and Organizations (ICMLPO), and archival materials is a well tried but not tired one.
The journal clearly went to went to press before the recent Indian General Election that saw the Hindu-fascist Bharatiya Janata Party (BJP)-led alliance win 353 seats out of the 545 seats in the Lok Sabha.
We start with an account of the huge mass rallies of workers and peasants, and related massive strikes. Unfortunately, despite huge turnouts they have been undermined by splits by unions affiliated to the ruling BJP. The reactionary Rashtriya Swayam Sevak Sangh founded a “non-political” trade union front, the Bharatiya Mazdoor Sabha (BMS). As a result, “The working class which spoke with one voice in negotiating with the government now stands divided, by this action of the BMS”, according to the author. That the unions’ Twelve Point Charter demands include a minimum wage of 18,000 rupees per month, or only £210, and an assured pension of all workers of only a third of that shows the grim reality that the Indian working class faces.
There is an interesting piece on the BJP government’s changes to the Citizenship Act, which make it easier for Hindu refugees from neighbouring countries to take up Indian citizenship and residence. There is widespread opposition particularly in the northeast of India where the new arrivals are said to be squeezing out the ethnic and religious tribal minorities in the area, opponents fear this is another attack on India’s secular constitution.
Amongst other shorter pieces is a critique of the pre-election budget and an account of a fatal fire at a hospital that approved its own fire safety certificates. A long book review on the political economy of health in India demonstrates that this tragedy was no random accident but the product of neoliberal deregulation. Another article is about protests by peasants who lost land to an aluminium factory but who have been denied the promised jobs, an example of all too common struggles.
International developments are covered in two articles about the USA, one on recent developments in the trade unions and another on Trump’s international policies.
There are also interesting pieces on Venezuela, France, Mexico, the Ivory Coast and Bolivia amongst others from parties belonging to the ICMLPO. The piece on Bolivia has some interesting reflections on the tactics of Che Guevara.
Contemporary history is covered in an interview with an Albanian agricultural expert who argues that socialist agriculture was working well in that country until it was destroyed by ‘reforms’ by the counterrevolutionary government 30 years ago. In particular they ended the small supplementary private plots, which saw peasants feasting for a year and which resulted in a serious shortage of breeding animals in future years.
The archival section has the usual rich mix of materials, beginning with a brief 1915 letter by Stalin to Lenin and his wife requesting books in English or French on the national question. A 1937 article by José Díaz, General Secretary of the Communist Party of Spain, advocates a “parliamentary republic of a new type” to unite all anti-fascists.
Another General Secretary, Bolesław Bierut of the Polish party, attacks his predecessor Władysław Gomułka, for amongst other things being too tolerant of right-wing nationalists in the country, in a 1948 piece entitled Roots of the Mistakes of the Polish Party Leadership.
The state of China in the immediate aftermath of liberation in 1949 is the subject of a conversation between Italian Communist Velio Spano and PA Shibayev, the Soviet Chargė d’Affaires.
Continued from the last issue is an extensive 1953 criticism of Lavrentiy Beria by Molotov made to the Central Committee of the party. It concludes with a draft of a hitherto unpublished letter from Beria to Aleksandar Rankovic expressing support for Tito of Yugoslavia.
Three archival items are concerned with India: A Soviet view on the Situation in the Communist Party of India in 1949, a 1953 Resolution of Party about the partition of Kashmir and a 1960 document on the party’s trade union policy.
Posted by london communists at 9:59 AM