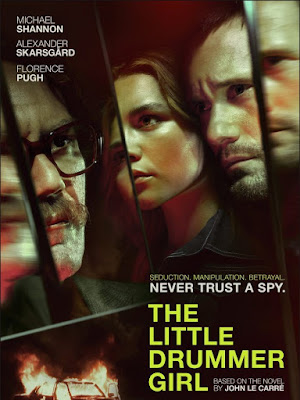 The BBC’s Sunday night espionage thriller is an adaptation of a John le Carré’s (real name David John Moore Cornwell) novel published in 1983. Le Carré, who worked for MI6 in the 1950s and ‘60s had an insight into the workings of the murky world of intelligence. His novels at least present a more realistic view of espionage; as opposed to the glamour of Ian Fleming’s James Bond. The Little Drummer Girl takes us back the late 1970s and the world of ultra-leftist terrorism and its connections to the Palestinian liberation movement. I have often wondered about the logic of the plot; Israeli intelligence recruit Charlie (Florence Pugh), a left-wing, English actress, to assassinate a prominent Palestinian. Charlie’s handler, Joseph (Alexander Skarsgård), convinces her that this will bring about an end to the conflict and a Palestinian State.
The story is about manipulation; a young idealistic actress by an unscrupulous intelligence service as well as the idea of an innocent abroad. Charlie, a supporter of the Palestinians, is now drawn into the armed struggle and becomes out of her depth. Meanwhile the idea of imperialist intelligence agencies manipulating ultra-leftist organisations is not unheard of. In 1976 the Italian Red Brigade murdered the centre-right Italian Prime Minister Aldo Moro; it is common knowledge that that Red Brigade was subject to manipulation by the CIA.
This six-episode television series is the second adaptation of the book; a film version came out in 1984 with Dianne Keaton playing Charlie. In the film version Charlie was a woman in her 30s, whereas in this version she is in her early 20s. Arguably a television series, because of its length, creates better opportunities to show the subtleties needed for a Le Carré story. Subtlety and detail are important in his stories. For instance, in a bomb making scene the words “Made in USSR” are shown on a clock. It is through detail that the programme successfully captures the late 1970s; a period I only remember as I child. The programme reminds us of a time when cigarette smoking was the norm and a scene in a fast-moving car reminds us that seat belts were not mandatory.
Joseph contacts Charlie and her actor friends by posing as some kind of mystery man reading a book about Salvador Allende, which being lefties they view positively. He woos her by taking her to Athens and showing her the Acropolis by night; he suddenly ends their romantic embrace and takes her on a car journey to meet the other Israeli intelligence operatives.
The programme is sickeningly pro-Zionist. It’s only reference to the Palestinian cause is with regard to terrorism – there is a scene where an Israeli intelligence officer shows a younger operative the monument to the athletes killed in 1972. No mention as to why they might have turned to armed struggle in the first place. Charlie and her fellow lefties are shown as naïve and pretentious. In a scene towards the end of Sunday’s programme a Palestinian, who has successfully evaded the Israelis for years, is easily captured by an attractive female operative posing as a hitch-hiker. Through good directing however, both Pugh in particular and Skarsgård utilise their acting skills to the maximum. I have seen worse things on Sunday nights.
Posted by london communists at 4:42 AM