Waterloo – a field in Belgium where in 1815 the armies of Britain, Prussia and other European powers defeated the armies of Napoleon Bonaparte. St Peters Field – a square in Manchester where on 19 August 1819 cavalry charged a crowd of unarmed protesters killing around 20 people.  The closeness of the two events led to the latter being called the Peterloo Massacre; an event now the subject of a feature film, Peterloo, directed by Mike Leigh.  The events in the field in Belgium were made into a film almost 50 years ago, in a film entitled Waterloo. A film about the events closer to home is long overdue. 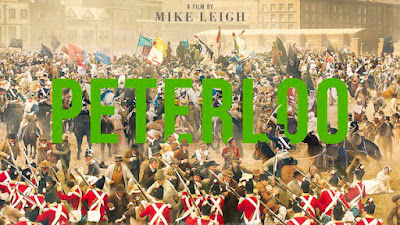 Peterloo starts on the field of Waterloo where a bewildered soldier stares at the carnage around him; it them moves to the House of Lords where the Prime-Minister Lord Liverpool calls for a sum of £700,000 to be paid to the Duke of Wellington for his services to the nation.
The film brings up the issue of history. Whose history? Do we celebrate the aristocratic victory in a field in Belgium or commemorate the working-class victims of a massacre in our own country by an unrepresentative government? It is sympathetic to the largely working- and lower middle-class reform movement. In 1819 only landowners (male ones) could vote in elections, ordinary people suffered the effects of both a downturn in the economy and from the Corn Laws, a tariff in on imported grain that put up the price of bread, introduced by a government dominated by landed interests.
Peterloo features an array of British actors, including Rory Kinnear as the suffrage campaigner Henry Hunt and Maxine Peake as a matriarchal figure and mother of the soldier seen at the start of the film.
Leigh uses her character’s narrative to explain contemporary economic and social problems. Peake has made a success of playing prominent, working-class female characters and has sponsored a number of progressive campaigns.
The film portrays Hunt, a Wiltshire squire, as a pompous character with an exaggerated sense of his own importance. He insists on being the only speaker at the rally and demands that no armed men are present. The arms in question were little more than pieces of gardening equipment as opposed to the sabres and muskets used by the attacking soldiers.  Anyone who has been on a demonstration in recent years would understand that these men would have acted as stewards and their presence may have reduced loss of life.
Leigh captures the events of 14th August well. He portrays the rally as a family day out with protesters coming from across Lancashire. The massacre involved three separate regiments: the Manchester & Salford Yeomanry, a largely irregular group of cavalry who are shown as violent and dangerous drunks; the more disciplined 14 Hussars; and an infantry regiment garrisoned in the town.
The Manchester & Salford Yeomanry are portrayed as the real villains of the event, which is the view of historians of the period, whilst the infantry, although armed with rifles, were the most vulnerable.
The magistrates, mostly local landowners, who bear ultimate responsibility are portrayed as pompous reactionaries with a sense of entitlement who view the lower orders with a mixture of fear and contempt. It shows them as provoking the massacre; a magistrate reads the Riot Act written on what looks like a post-it note from the window overlooking the square when no one is listening or even able to hear.
We see unarmed members of the crowd killed with sabres; one of whom is the soldier shown at the start of the film. Historic records state show that one of the victims of the attack was John Lees, a veteran of Waterloo.
Peterloo raises the issue of patriotism. An informant who offers his services to the government describes himself as a patriot. At the end of the film Lord Liverpool and the Home Secretary Lord Sidmouth inform the Prince Regent of the events in Manchester; the three of them start mumbling the word “England” over again as if in some kind of trance.  How much of a force for good is it in a country not facing foreign domination?
This leads us to the issue of what should be taught in schools, the events in a field in Belgium or those in a square in Manchester? There is a public house about a mile from my home; I have frequently enjoyed a pint of ale, or two there. It is called the Waterloo Arms – maybe it’s time that its name was changed to reflect our history not theirs.
Posted by london communists at 1:40 PM