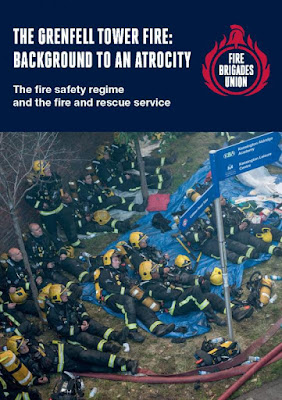 
The Grenfell Tower Fire: Background to an Atrocity. The Fire Brigades Union (2018)

Health and Safety has for a number of years been part of a conspiracy of faceless bureaucrats to stop us from having fun, destroy free enterprise and generally make our lives a misery. Or at least this is the line peddled by the neo-liberal right and their supporters in the media. This nonsense literally went up in flames on 14th June, 2017 when Grenfell Tower in Kensington caught fire resulting the in deaths of over 70 residents. In their recent pamphlet, the Fire Brigades Union (FBU) covers issues around Health and Safety Legislation with specific reference to Grenfell Tower.
In this pamphlet the FBU covers the erosion of Health and Safety Law from the 1980s onwards. Progressive Health and Safety legislation was introduced in the 1960s; in particular the Factories Act (1961). The situation further improved in the 1970s with the Fire Precautions Act (1971) and (Health and Safety at Work Act (1974). Contrary to myths put out by the right-wing media, legislation began to be undermined in the 1980s and 1990s. Government papers started to refer to “over provision” of regulations. The process of deregulation continued through 1990s and also through the Brown/Blair years.
The most significant factor behind the Grenfell Tragedy was the issue of external cladding. Cladding is a layer of material applied to the outside of buildings as a means of insulation and protection from the elements. It can be made from a range of materials including wood, metal, brick, vinyl and a range of composite materials. The issue with Grenfell Tower and similar blocks is that cladding, if made from flammable material, enables fire to spread along the outside of the building. Suffice it to say, flammable cladding is cheaper than its non-flammable alternatives.
The Grenfell Tower fire was not the first time the issue of external cladding had been raised. In 1991 in Merseyside and again in 1999 in Ayrshire fires spread rapidly through buildings with outside cladding. Luckily in both cases no fatalities took place. A report in 2004 however, stated that measures should exist to inhibit the spread of fire via external walls. Suffice it to say, the FBU has insisted that only non-combustible cladding be used in buildings more than 25 metres high.
In their conclusion the FBU makes a number of demands for improved safety standards.  In a summary of the recommendations they use three simple words: Prevention, Protection, Intervention.
The last of these words strikes a chord with the Grenfell tragedy. It is a lack of Intervention we have suffered from over the last 30 years – not too much of it.
The pamphlet is available from the Fire Brigades Union, Bradley House, 68 Coombe Rd, Kingston-upon-Thames, Surrey, KT2 7AE.
Posted by london communists at 7:13 AM