The reinvention of Britain 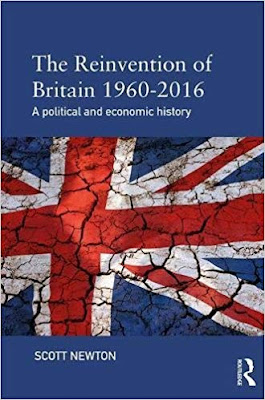 Scott Newton’s book is a detailed study of British economic history from the 1960s to the present day. The book consists of two sections: the first entitled The Fall and Rise of Social Democratic Britain, covering the period from 1960 to 1979; and the section on neo-liberal Britain covers the period from the first Thatcher Government to the 2016 Brexit Referendum.
Newton’s thesis is that there was a progressive, social democratic consensus that was established by about 1960. It gave us the NHS and social housing, and was based around Keynesian economics, which saw the alleviation of unemployment as a major role of government policy. Although it had its problems, it generally worked and was socially fairer than the neo-liberalism of today.
This was undermined in the 1980s by a ‘neo-liberal revolution’ led by reactionary elements within the British state. He argues that 40 years of neo-liberalism has led to increased social inequality, a distorted economy far too dependent on the finance and service sector as well as regional inequalities that could result in the breakup of Britain itself.
Although not a Marxist-Leninist analysis, it is a breath of fresh air compared with the usual drivel in the bourgeois media.
Bourgeois gurus argue that Britain was essentially a basket case in the 1960s and ‘70s, mainly as a result of nationalised industries and trade union power, and that Margaret Thatcher somehow “saved Britain”. In putting forward his particular version of social democracy, Newton does a good job of demolishing this view.
In the chapter {Conservative Social Democracy} he explains why Britain did not experience a similar economic miracle to that of many continental countries. These states were still able to benefit from the movement of labour from the countryside to urban areas, this was not the case with Britain.
Also, the movement of cheaper workers from rural areas was able to keep labour costs down, thus assisting economic growth. He argues that countries such as France, Italy and Germany were simply catching up with Britain. Meanwhile it should be pointed out that these countries pursued a similar economic model to Britain.
Later in the book Newton makes good use of statistics to demolish some of the myths about economic growth put forward by neo-liberals. He explains that Britain had higher economic growth in the earlier part of the 1960s and ‘70s than under the neo-liberal governments since 1979.
Newton makes incorrect use of terminology however. He refers to the events of 1956 in Hungary as an “anti-communist revolution”. There is no such thing. The events in question were in fact a violent counter-revolution, whereby the rebels planned to restore capitalism. A revolution takes society in a progressive direction and a counter-revolution is the reverse. His poor use of terminology is shown again when he uses the term “Thatcher’s Revolution” in a chapter on her period in office. This should, however, not detract from positive aspects to the book.
The Thatcher government brought about a shift in government policy from one that saw the alleviation of unemployment as the major focus of government policy to one that prioritised the control of inflation. In other words, a change from Keynesian Demand Management to neo-liberalism. Keynesian Demand Management means increasing government spending at times of recession in order to keep the economy afloat. Neo-liberalism is in fact a return to an older 19th century thinking often referred to as Financial Orthodoxy, where the main role of government is to control inflation through the use of interest rates and ensure stable currency.
What Newton calls “Conservative Social Democracy” was in fact Keynesian Demand Management. The Conservative government faced a Cabinet revolt in 1958, when the Chancellor, Peter Thorneycroft, and several junior Treasury Ministers, including Enoch Powell, resigned.
The likes of Thorneycroft and Powell believed in Financial Orthodoxy; keeping inflationary pressures under control, which also meant a strong pound. The Prime Minister, Harold MacMillan favoured the Keynesian approach. MacMillan prevailed. From then onwards, until the late 1970s, Keynesian Demand Management was the order of the day.
Post-Thatcher governments have continued with the policy of neo-liberalism.
When asked what her greatest achievement was, Mrs Thatcher famously replied “Tony Blair”, another staunch supporter of neo-liberalism. Suffice it to say, the period from 1979 has seen a growth in inequality, which the book correctly states, along with a shift in power in favour of the wealthy and the financial sector in particular.
Newton calls for an end to neo-liberalism, making the book a {de-facto} endorsement of the policies of John McDonnell and Jeremy Corbyn; opposition to neo-liberalism is a major part of their programme.
The book is worth reading if you are interested in British economic history – although I fear it will remain in university bookshops and libraries rather than finding its way onto the high street..
Posted by london communists at 1:04 PM