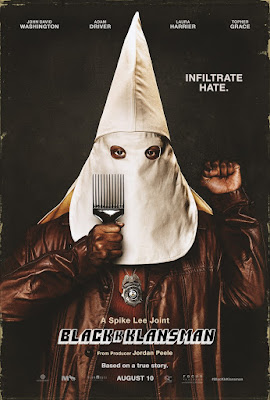 BlacKkKlansman is Director Spike Lee’s latest work based on the memoirs of Ron Stallworth, who in 1979 was the first Black American to join the Colorado Springs Police Department. Initially he is asked to infiltrate the Black Power movement, which was active amongst Black Students in the city. He attends a meeting where the main speaker is Kwame Toure (aka Stokely Carmichael) and becomes involved with a student activist, Patrice Dumas, who bears a sticking resemblance to the US Communist Angela Davis. When Stallworth is told by his boss “not to get too friendly between the sheets” the British ‘Spycops’ scandal immediately came to mind.
But the main thrust of the film is Stallworth’s attempt in impersonate a Klu Klux Klan (KKK) sympathiser. In a series of telephone conversations he convinces the Klan leader David Duke, who is still active in far-right politics today, of his authenticity. For obvious reasons, to attend Klan meetings and ingratiate himself with members a white officer was required. This role goes to Flip Zimmerman, played by Adam Driver (Star Wars, The Force Awakens; Star Wars, The Last Jedi).
Lee uses his obviously outstanding directing skills to the full. The film contains action, humour, suspense and romance, with an obvious political message about race relations in the USA today. In one scene an officer talks to Stallworth about the Klan’s long-term strategy and states that one day they hope to get one of their own into the White House. An obvious reference to Donald Trump.
The film contains a moving scene where an elderly Black man, played by Harry Belafonte, describes the murder by a White mob of his friend in 1916. At the same time members of the local Klan enjoy a slap-up meal and watch Birth of a Nation, a 1915 film that was originally called The Clansman.
The film’s action and suspense centres around Zimmerman’s attempts to avoid and deflect suspicion, and ingratiate himself with the Klansmen. On several occasions Zimmerman, who is Jewish, is forced to out-racist the racists. In a diatribe about the Holocaust a Klan member claims it was faked; Zimmerman replies by stating it was a wonderful thing. This role raises the whole question of identity; at one point he states that he was never really bothered about his Jewishness until confronted with actual anti-Semitism.
The film ends with footage of the events in Charlottesville in 2017, during which a racist drove a Ford Mustang into a crowd resulting in the death of anti-racist protester Heather Heyter. And a now older David Duke is shown addressing a group of racists and praising Donald Trump.
The message of the film is perhaps: “Have things changed that much?”
Posted by london communists at 3:18 AM