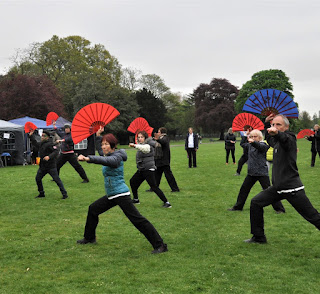 FOR NEARLY two decades, a quiet, subtle phenomenon has grown across the planet. Each year, on the last Saturday of April, in hundreds of cities in over 80 nations, spanning six continents, World Tai Chi and Qigong Day events have been held.
In Charlton, south-east London, people from many different groups gathered last Saturday to practice tai chi together in the open air in different styles and to celebrate Chinese culture.
In addition to the tai chi there was Chinese food, a Chinese tea ceremony, a demonstration of Chinese calligraphy, Chinese music and of course a Chinese dragon, who took part in an enactment of a Chinese traditional fairy story.
The event attracted attention from many people who happened to be passing through the park at the back of Charlton House, and one or two toddlers were inspired to join in with the tai chi exercises for a while.
Advanced practitioners held onlookers spellbound with dramatic sword exercises, backed with dramatic Chinese music.
Posted by london communists at 10:18 AM