A recipe for resistance 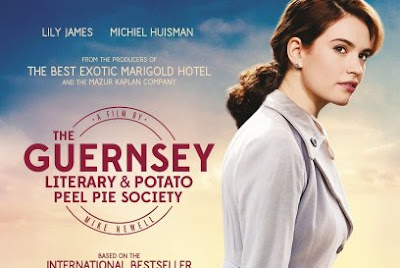 The name of the film is of an imaginary society established in occupied Guernsey as a means of getting around the occupation curfew laws. Most of the film, however, is set in 1946. Subsequently I was initially disappointed, expecting tales of resistance to the Nazi occupation. The subject of resistance was raised but it only played a small role in the film.
Resistance on the Channel Islands was not on the same level as in occupied France, the Soviet Union or the Balkans. This could be explained by large numbers of men of military age leaving islands when war broke out. Also, the limited strategic importance of the islands may have reduced their interest to the Special Operations Executive (SOE). This is not to deny that resistance took place. Many islanders sheltered escaped slave labourers, who were used to build fortifications, and at least seven islanders died in concentration camps.
The film centres around Juliet Ashton, played by Lily James (Downton Abbey, War and Peace); a best-selling author who feels a degree of guilt about the limited role she played in World War Two. Lily finds herself travelling to Guernsey to discover more about this wartime reading and improvised food group. In one scene she tastes piece of potato peel pie and discovers that it tastes like, well – soil.
Lily discovers stories about wartime resistance, collaboration and the confiscation of livestock during the occupation; which explains why islanders were forced to live off food waste. Severe hardship came after the Normandy landings when the islands were cut off from both Britain and now liberated France.
Intertwined within the film is the story of Lily’s relationship with her American fiancé; as well as a love interest between her and Dawsey Adams, a Guernsey pig farmer/builder and a member of the society.
The film contains elements of well thought out symbolism; for instance, the Dakota transport plane landing on a beach arguably represents the power of US imperialism in the post-war era, as well as informing us that Guernsey did not have an airport at that time. Another scene when her fiancé straps her into the seat of the aircraft tells us all we need to know about her fiancé's over-bearing nature.
The film contains a star-studded cast including Penelope Wilton and Jessica Brown-Finlay (both previously from Downton Abbey). Another criticism of the film is that Ms Brown-Finlay’s role in the film is heavily underused, along with stories of resistance. The Guardian review for the film described it as “Downton Abbey subject to Nazi occupation”. However, is it correct to judge the film by the cast’s previous roles? There are numerous examples in both film and television of actors who have previously worked together reappearing in another production. They are, after all, actors.
Tom Courtney, who has played numerous roles since 1962, stars as the somewhat elderly post-master. The film also contains scenes of humour as well as posing complex questions about life under occupation. In the occupied Channel Islands women who had relationships with members of the occupying forces were referred to as “jerrybags”. The film raises the question – was it as simple as that?
Although I was initially disappointed with the film, it did raise a number of thought provoking ideas. Namely the ability of cinema to take us to times we will never be able to experience or relive; or to take us to places we may never visit. This can be seen in well created scenes of post-war Britain as well as Guernsey’s wonderful scenery.
It also contains an amusing scene of Tom Courtney’s character throwing up over a German soldier’s jackboot. If you view the film as a post-war coming of age drama, rather than simply about the wartime occupation of the Channel Islands, you will be less disappointed.
Posted by london communists at 4:11 AM