The Boston Massacre: The poor, not the elite, began the American Revolution

America’s rulers tell us that this country was built by people with property. For most of us, that message started with our first history class, where we were told that this country was founded by upstanding, property-owning folk in New England and Virginia. In fact, the American Revolution was begun by people who didn’t own anything, people who were the ancestors of today’s downsized and underemployed. It’s time to tell their story because we need their fighting spirit back again.
The first battle of the American Revolution was the Boston Massacre of March 1770. At that time, Boston had been occupied by British troops for 17 long months. The poor of Boston hated that occupation every bit as much as the residents of today’s inner cities hate the police occupation of their neighbourhoods.
All through the long winter of 1769, soldiers and citizens had clashed in street brawls and tavern fights. March 5th  1770 began as a cold and grey day. That evening, a small crowd gathered around a British sentry, accusing him of striking a young boy with his musket. The members of the crowd began hurling insults (and any missile they could find) at grenadiers who arrived to reinforce the sentry. The soldiers started shooting. By the time they were finished, “half a pail of blood” had been spilled into the snow, according to one eyewitness.
The first man to die – the first martyr of American Independence – was a black man named Crispus Attucks, a native of Framingham, Massachusetts. He had escaped from slavery in 1750 and had gone to sea as a sailor. 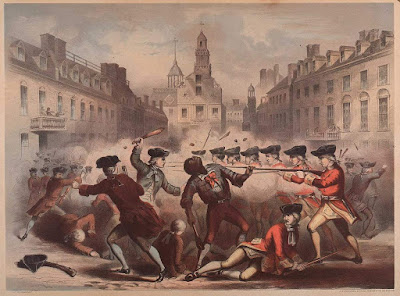 In total, five people were killed. Samuel Gray was a ropemaker; James Caldwell was a sailor; Samuel Maverick was a 17-year-old apprentice; and Patrick Carr a leather worker. Carr was also an Irish immigrant.
The massacre provoked outrage. On 8th March about 10,000 of Boston’s 16,000 inhabitants took part in the funeral procession of the martyrs. (At the time, this was the largest procession ever to have taken place in North America.) Attucks, Caldwell, Gray and Maverick were buried in the same grave. Nine days later, Carr’s body joined theirs.
The British troops were put on trial. Their lead defence attorney was John Adams, a wealthy lawyer who later became the second president of the United States. In his closing remarks to the jury, Adams said the killings were justified and blamed the violence on the immigrant (Patrick Carr from Ireland) and the black man (Crispus Attucks). He called the crowd on King Street “a mob” and “a motley rabble of saucy boys, negroes and molattoes, Irish teagues and outlandish jack tars.” (“Teague” is a despicable term of contempt for Irish Catholics)
All but two of the soldiers were acquitted, in part because of Adams’ demagogic speech. Adams’ statements show the contempt that America’s elite has always felt for the country’s have-nots. In colonial times, the poor were called “the mob” or “the rabble.” Today, the unemployed and underemployed are referred to as “the underclass.” The names change, but the game remains the same.
In recent years, it has become fashionable for ruling-class historians to downplay the Boston Massacre. Some dismiss it as a minor “riot” (in the same way that the Los Angeles Rebellion of 1992 is trivialized by calling it a “riot”). But nothing can change the fact that the Boston Massacre started the American Revolution. “From that moment,” Daniel Webster said, “we may date the severance of the British Empire.”
It was not until 1887 that Boston authorized the erection of a monument to the martyrs in Boston Common. On it are the words of John Boyle O’Reilly:

“And honor to Crispus Attucks,
who was leader and voice that day:
The first to defy, and the first to die,
with Maverick, Carr and Gray.
Call it riot or revolution, or mob or crowd as you may,
Such deaths have been seed of nations,
such lives shall be honored for ay …”

Every year on 5th March, we would do well to remember how the American Revolution began. While slave-owners and other wealthy people eventually wormed their way into the leadership of the revolution, they did not shed its first blood. The first man to die in the American Revolution was a black man. Since that man was a runaway slave compelled to use an assumed name, he was, in a sense, an “illegal.” Another of the casualties in that first engagement was an immigrant. A third was a teenager. And all five who died were workers. They now sleep forever in the same grave in the Old Granary Burial Ground in downtown Boston, a symbol of the unity of America’s poor – black and white, immigrant and native-born, “legal” and “illegal,” young and old.
When I visited Boston in 1996, I saw homeless people shivering in the April cold just a few feet outside that cemetery’s gate. Clearly, we once again need the unity of the poor that “the rabble” displayed on King Street in 1770. Without it, we won’t be able to take back the country that the martyrs of 5th March 1770 helped create.
Posted by london communists at 4:50 PM