Made in North Korea 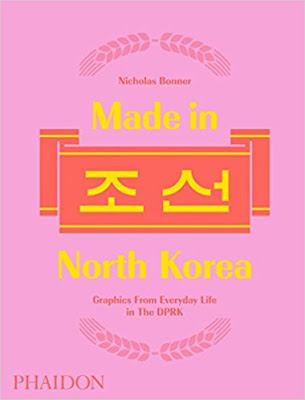 The gentrified area just north of Kings Cross, with its trendy shops and coffee bars, is not the sort of place where you would expect to find an exhibition of socialist realist art from a revolutionary anti-imperialist country. Yet the House of Illustration in London’s Granary Square (an area redeveloped from old railway land) is hosting an exhibition of graphic art from the Democratic People’s Republic of Korea (DPRK) that ranges from posters to canned food labels.
The exhibition was arranged by tour operator and film maker Nick Bonner as part of an effort to promote his book Made in North Korea. Needless to say, commercial and business considerations were reflected in the fact that an admission fee of a minimum of £7.50 was charged and there was merchandise such as the book itself,  priced at £24 (well out of reach of many low-income supporters of People’s Korea), along with the Comrade Kim Goes Flying DVD. This is the only joint British–DPRK film ever made and is about a girl miner who aspires to be trapeze artist, and was priced at £15.
There are those who question the motives of people such as Bonner. Some believe that they have a ‘reform’ and ‘opening up’ agenda for the DPRK – basically trying to undermine its socialist system by subtle means, acting as a form of ‘soft power‘ for imperialism.
The exhibition had a range of art and products from the DPRK. Many of them were quite familiar to people such as myself, who has visited the country 14 times. They include posters and things such as notebooks, badges, pens and other souvenir items you very easily find in gift shops when you visit the DPRK. Bizarrely, even Air Koryo sick bags had been included!
The DPRK is very famous for its poster art, and pride of place was given in the exhibition to posters encouraging workers and farmers to increase production, for improvements in health care and many other things. The militant anti-US posters were not to be seen in the exhibition however, probably a deliberate omission. Moreover, the explanatory notices for the exhibition omit any mention of the Juche Idea, the DPRK’s guiding ideology, and the Songun (Army first) idea. Also, clichés such as “state run” had seeped into the explanations, plus one or two questionable assertions about the DPRK that probably reflect wishful thinking on the part of the organisers.
Despite his long involvement with the DPRK, Bonner does not appear to have any understanding of Juche and the Juche-based socialism of Korean style, so makes reference to the DPRK “copying” Soviet and Chinese art. In fact President Kim Il Sung argued strongly for Juche in art as well as all other fields of society. Copying Soviet and Chinese styles were regarded negatively as flunkeyism towards big powers.
I would suggest that those who want to learn more about People’s Korea start off by joining the Korean Friendship Association (KFA); basic membership is free of charge
Posted by london communists at 2:24 PM