Remembering the horror of slavery 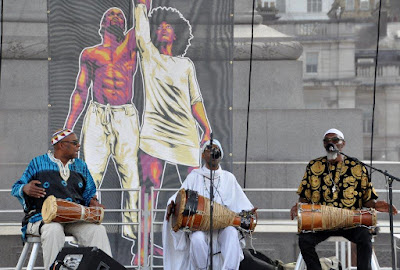 Londoners wore Sankofa badges at a rally to remember the victims of the slave trade in Trafalgar Square last weekend. The badge, much like the British Legion poppy, was designed to commemorate International Slavery Remembrance Day, and acknowledge and commemorate the tens of millions of men, women and children kidnapped from the African continent and sold into slavery.
A national memorial service was held in Trafalgar Square on Sunday, as part of a series of events across the country leading up to 23rd August – the day chosen by the United Nations Educational, Scientific and Cultural Organisation (UNESCO) as a tribute to the victims of the transatlantic slave trade. On that day in 1791 the slaves in the French colony of Saint Domingue, now Haiti, rose up in a rebellion that drove the French out and established the first independent state in the Caribbean.
Whilst the day is a tribute to every victim and their resistance against slavery, it is also a reminder of the importance of teaching history, a senior UNESCO official stressed.
Posted by london communists at 2:32 AM