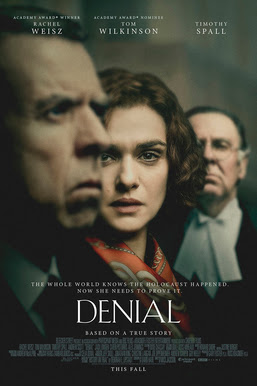 THE FILM Denial was released in Britain on 27th January, Holocaust Memorial Day. It is an account of an extraordinary libel case brought by the notorious pro-Hitler writer and activist David Irving against Prof Deborah Lipstadt, an American historian, who mentioned him in her book Denying the Holocaust as a Holocaust denier, falsifier and bigot who manipulated and distorted real documents, and was an anti-Semite and a falsifier of history.
Irving appears at a lecture in 1996 being given by Lipstadt, disrupting her talk to accuse her of lies, distortion and denying him free speech. He holds up a wad of money and promises to pay $1,000 to whoever could produce a bona fide document signed by Adolf Hitler ordering the mass extermination of Jews.
Soon after this, she receives notice that he is suing her and her publisher, Penguin Books, for libel in the British courts. Lipstadt hires British solicitor Anthony Julius. He explains to her the peculiarities of British libel law, where the defendant carries the burden of proof – to prove that their statements were justified. She has to provide solid evidence that the Holocaust really happened and if she fails there will be a legal verdict forever endorsing doubt over the issue. She has no choice but to fight.
Julius works together with Kevin Bays, the solicitor representing Penguin Books, and libel specialist Mark Bateman. They engage libel barrister Richard Rampton. Together they negotiate with Irving, who represents himself in court, that “because the technicalities of the case would be too difficult for ordinary people to understand” the case would be tried before a judge and not a jury.
The trial opened in 2000. Lipstadt’s legal team decided not to put her in the witness box – nor any of the willing Holocaust survivors who are following the case closely – a decision that she finds hard to accept. They have seen Irving before attack and demolish survivors giving evidence, saying that they tattooed the numbers on their arms themselves and made up their stories to gain money and sympathy.
The team’s aim is to prove that the Holocaust was all too real and that Lipstadt’s words were justified by taking just about everything Irving has written – including dozens of diaries – and proving that he knowingly lied in his books and deliberately falsified history to fit with his pro-Nazi views.
This involves a team of senior academics: Professor Richard J Evans, historian and Professor of Modern History at Cambridge University; American Holocaust historian Christopher Browning; German historian Peter Longerich; Dutch architectural expert Robert Jan van Pelt; and a forensic visit to the Auschwitz site. Effectively they turned the trial around, putting Irving and everything he had written on trial.
They won. The judge summed up his verdict: “Irving has for his own ideological reasons persistently and deliberately misrepresented and manipulated historical evidence; that for the same reasons he has portrayed Hitler in an unwarrantedly favourable light, principally in relation to his attitude towards and responsibility for the treatment of the Jews; that he is an active Holocaust denier; that he is anti-Semitic and racist, and that he associates with right-wing extremists who promote neo-Nazism therefore the defence of justification succeeds. It follows that there must be judgment for the Defendants.”
In light of the evidence presented at the trial, a number of Irving's works that had previously escaped serious scrutiny were brought to public attention. He was also liable to pay all of the substantial costs of the trial, which ruined him financially. Irving was declared   bankrupt in 2002 and was forced to move out of his spacious apartment in London’s West End.
The film finishes with Irving being interviewed on television by Jeremy Paxman, claiming to have won the case and trounced his opposition. For Irving the verdict was the result of prejudice on the part of the judge, who is part of a conspiracy to deny him free speech. Irving is still in denial today.
It is a film well worth seeing.
Posted by london communists at 2:55 AM