Celebrating the Russian Revolution in Brussels 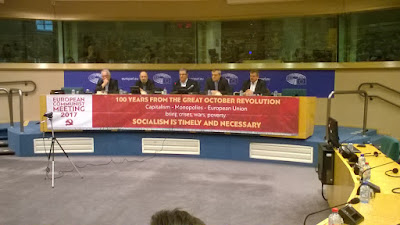 Communists from all over Europe gathered in Brussels last month to commemorate the 100th anniversary of the Great October Russian Revolution. A New Communist Party (NCP) delegation joined comrades from many other communist parties for the 10th annual European Communist Meeting on 23rd January. NCP leader Andy Brooks represented the Party at the day-long conference at the European Parliament in the Belgian capital.
The European Communist Meeting was hosted by the Communist Party of Greece (KKE) delegation to the European Parliament, and held with the participation of 41 communist and workers parties. Important issues related to the working class, the European and international labour and communist movement, and the struggle of the communists were discussed in light of the important 100th anniversary of the October Revolution.
The October Revolution was an historic event of world-wide significance  – the most important event of the 20th century, which made its mark on the course of humanity. It was the harbinger for a new historical period, the period of the transition from capitalism to socialism. It formed the preconditions for unprecedented workers’ rights to be realised and lent impetus to the struggles of the workers in the capitalist countries. It decisively influenced the development of the international communist and workers’ movement, and the liberation of the oppressed peoples of Africa and Asia from the colonial yoke. The Great October Revolution confirmed the correctness of Marxist-Leninist theory and of the irreplaceable leading role of the Communist Party.
Many speakers stressed that the counter-revolutionary changes of the early 1990s have not altered the character of our era. Socialism remains timely and necessary. Optimism was expressed that capitalist barbarity is not the future of humanity, and that our century will be marked by a new upsurge of the global revolutionary movement and new socialist revolution.
Several comrades referred to the counter-revolutions; their negative consequences and the causes, mistakes and deviations that led to the overthrow of socialism. It was noted that over the course of time the elements and methods of capitalism were introduced to solve existing problems in the Soviet Union and the people’s democracies of eastern Europe, and that this gradually weakened and in the end undermined socialist construction.
Amongst the most important tasks of the communists today is to confront the anti-communist campaign of the European Union (EU), restore the workers' knowledge about the truth of socialism in the 20th century; objectively without idealisations and free of the slanders of the bourgeoisie, which are based on the catastrophes brought about by the counter-revolution.
Capitalism may still be strong today but it is not invincible. The crisis has demonstrated more intensely its historic boundaries. The difficulties in the European and global capitalist economy sharpen inter-imperialist contradictions. The competition between the capitalist powers is intensifying, as well as inside the imperialist unions such as the EU and NATO. The war flashpoints are multiplying, there is an increasing danger that these will take on a general wider character.
The way out for the working class and the other popular strata is only possible via the path for the overthrow of capitalist power and ownership.
Many parties noted that this struggle presupposes the weakening of the various forms of dangerous reformism-opportunism, of the so-called Party of the European Left and the “governmental left” as it is expressed in Greece by Syriza. It was stressed that the various approaches to managing capitalism are not an alternative solution for the peoples. The experience from subordination to bourgeois governance is negative, regardless of its label, as is the experience from participation in or toleration for governments in the framework of capitalism.
The October Revolution and the struggles for socialism in the 20th century are the source for the drawing of important experience and lessons that the communist and workers parties can utilise so that they become more effective in their efforts to strengthen and provide a class orientation to the labour movement; to construct the alliance of the working class with the poor urban and rural popular strata; to organise the workers’–people’s struggle against the monopolies, their international alliances and their power; for rights that correspond to their needs today; for the abolition of exploitation.
If the 20th century began with the great offensive launched by the proletariat on the heavens and ended with its temporary defeat, the 21st century will bring the final and this time irreversible overthrow of capitalism and the construction of socialism-communism.
Posted by london communists at 4:50 AM