The Establishment and all that... 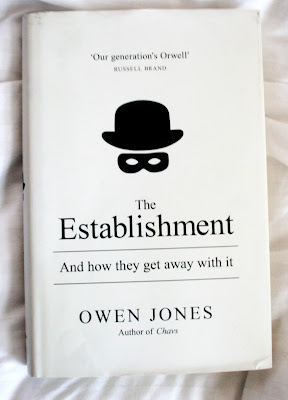 THIS CAN be a useful book. Although much of its content will be recognised by regular New Worker readers it is an excellent quick reference source for information about many of the major struggles of the recent past. It would also be an ideal book to put in the way of political people who still have a soft spot for the status quo.
It is a blistering attack on the “Establishment”, interesting and well written. The author writes with righteous indignation on the corruption and short comings of the media, Parliament, police and bankers – with lots of hard facts and interviews to back up and enliven his case.
But the theory behind his arguments is essentially weak.
His idea that there have been different “Establishments” since the Second World War hardly survives his own description of it – slippery, changing according to circumstances, ready to adapt where it believes necessary and possible. Where is the need to divide it up?
It is rather misleading to do so. The division in the ruling class between radical free-trade non-interventionists and Keynesian social democrats is a natural one but at bottom it only one of degree, as the author himself strongly points out. It is their state and they will use it when and where they wish – they have to.
The author rightly thinks that one of the main problems for progress is that people do not see an alternative to the present system. From that position you might think he would examine some of the many successful attempts to build an alternative (that is socialism!) in the Soviet Union, German Democratic Republic, Yugoslavia, Cuba, China or Democratic Korea.
This not an easy area because this is where the ruling class ideological assault is arguably strongest, but if the working class thinks that all previous attempts to move forward have been disasters it is an enormous anchor on their struggles – so it must be tackled.
The author has a concept of gradually expanding democracy in which democracy is not tied to class. Like many others before him he thinks that democracy and participation can be gradually extended until we are in a new society.
Again he refuses to learn from history – the English Revolution, the French Revolution, the Russian Revolution, Cuba and Chile all show that the ruling class (a far better term than “Establishment”) will always fight to keep its dominance.
Owen Jones does not, I think, claim to be a Marxist and sadly this is all too evident in this book. A back bone of Marxism–Leninism might have turned this work from a useful and very readable reference work into a brilliant revolutionary document (although I doubt that Penguin would have published it!). Still, if it stirs people’s anger against the status quo then they may look about for more satisfying explanations and solutions.
Posted by london communists at 6:49 AM