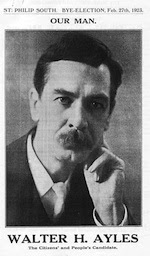 TRADE unionists and labour movement activists came together last Sunday to honour the life of Walter Ayles, one of Bristol's conscientious objectors during World War One. The event, organised by Bristol's Remembering the Real World War One group, culminated with the unveiling of a Blue plaque in the St Andrews district of Bristol. Relatives of Bristol conscientious objectors were also present, one of whom unveiled the plaque.
Roger Balls set the scene by reminding those gathered that a few days before the start of the war Bristol dockers had held an open meeting addressed by Ernest Bevin (national organiser Dockers Union) and Ben Tillett (general secretary National Transport Workers Federation), which took the position to oppose the war.
Colin Thomas, author of recently published biography of Walter Ayles, Slaughter No Remedy, gave a brief résumé of Walter's life.
It wasn't only his opposition to war that was significant to the people of Bristol. In 1910 Ayles took up the job of Bristol full-time secretary of the Independent Labour Party.  Shortly after he published [Bristol’s Next Step], which argued that transport, gas and water “must not be entrusted to private individuals any longer, but must be placed in the hands of the people themselves”.
In April 1916 he was arrested for distributing Repeal the Act – a pamphlet calling for the repeal of the Military Service Act under which conscription was introduced.
The unveiling of the plaque, on 17th April, took place on the centenary of the day that Ayles was first arrested. There was poetry, song and excerpts, spoken by an actor, from a statement that Ayles made to Bristol Magistrates.
“If I believed in the efficacy of slaughter to remedy evils, I would long ago have advocated the killing of those who, year after year, have been responsible for the sweated, the starved and the slummed. I know however in my heart of hearts that slaughter being wrong is no remedy.”
He was sentenced by to 61 days in prison.
On his release from prison Ayles was conscripted. Like many others he applied for conscientious objector status at a Military Service Tribunal, where he pointed out: “Because horrible outrages and ghastly crimes have been committed by others that is no reason why I too should kill and destroy… I can only help to prevent them by a refusal to join in war. Hate cannot be destroyed by hate. It can only be transformed by love.”
His application was refused and he was handed over to the military. Refusing to wear uniform, he was court-martialled and served 112 days in prison with hard labour. On release he was conscripted again and imprisoned again. Overall he was imprisoned from April 1916 to February 1919. Whilst still in prison Ayles attempted to stand for Parliament in the 1918 election.
He later headed the “No War Movement” and became a Labour MP for Bristol North. In later years he became MP for Hayes and Harlington.
The current MP for Hayes and Harlington in West London, the Shadow Chancellor, John McDonnell, had previously sent a letter of support: “It is an honour to represent the constituency that Walter once served with such distinction.”
John McDonnell went on to describe Walter Ayles as “a courageous socialist and peace campaigner, who made such a contribution to our community”.