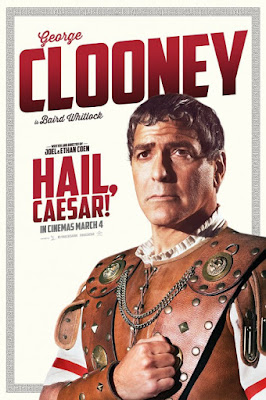 HAIL CAESAR! is a great comedy film for lefties and film buffs alike, set in a giant Hollywood film studio in the early 1950s. It follows a day in the life of the studio problem fixer, Eddie Mannix (played by Josh Brolin). He is clearly a man under serious stress, concerned over whether the studio’s biblical sword-and-sandals epic, [Hail Caesar!] and its restrained portrayal of the “Supreme being” is going to upset any religious community, he consults with Jewish, Muslim, Catholic and Greek Orthodox leaders.
The studio’s glamorous swimming star, DeeAnna Moran, played by Scarlett Johannson, is having problems fitting into her mermaid costume as her pregnancy advances. Mannix must find a way of enabling her to adopt her own baby so that the film-going public will never realise she is not a virgin.
And he has to appease film director Laurence Laurentz (could be either Noel Coward or Laurence Olivier), played by Ralph Fiennes, when the studio boss insists the lead role in a literary drama, Merrily we Dance is given to Hobie Doyle, played by Alden Ehrenreich. He is the star of cowboy films, could be Roy Rogers or Gene Autrey – great at performing tricks on the back of a horse or with a lasso but, as Laurence Laurentz puts it: “A dust actor; the man barely knows how to talk.”
And all the time Mannix has to ward off twin rival gossip columnists Thora and Thessaly Thacker, both played by Tilda Swinton.
Meanwhile Mannix is being tempted to quit tinsel town and go to work for Lockheed, the armaments company that was then testing H-bombs on Bikini Atoll in the South Pacific.
Mannix’s problems multiply when his lead actor in Hail Caesar!, Baird Whitlock played by George Clooney, is drugged and abducted by a strange group who call themselves “The Future” and are demanding a ransom.
The action goes lightly from one studio set to another and we see cowboy horse riding and rope tricks as well as great well-choreographed song-and-dance sets from a synchronised swimming water ballet to a bar-room full of American sailors about to set sail for the South Pacific (and the Bikini Atoll?).
The film is full of subtle and not-so-subtle references to classic Hollywood films and some cleverly crafted political jokes. To go into more detail would spoil it for viewers. Just have confidence in the writers. Even so, it is probably worth seeing more than once to make sure you catch all the jokes and nuances.
Posted by london communists at 3:43 AM