A manor in a housing estate 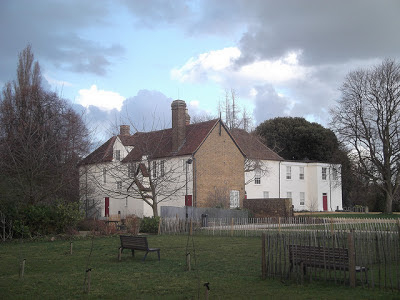 FOR SOMEONE who grew up in Dagenham, Valence House has always had a special place in my heart and is a reminder of a rural Dagenham long since forgotten. It is the only manor house left in the borough and within its walls are relics and mementoes from Roman days right up to the 21st century.
Some parts of the house date back around 700 years and it was most recently a working farm run by the May family until it was compulsorily purchased in 1921 to make way for the building of what was to become the largest council estate in Europe.
The museum opened its doors to the public in 1937 and was initially just a small collection of finds run by the local library and open only a few afternoons a month, while the rest of the house was used for public meetings and local exhibitions. Two major renovations, including a major revamp in 2007 financed partly by a Heritage Lottery grant have transformed it into one of finest local museums in Greater London.
People settled the area during the Stone Age and the display of their tools and other flint implements is the path through which visitors wend their way through the building. Finds include the “Dagenham Idol” – a Neolithic wooden totem unearthed during sewage works in 1922. A scattering of  finds testifies to the impact of four centuries of Roman rule, while Saxon and medieval Dagenham is well represented in the history of nearby Barking Abbey and the local manor houses which were all swept away when the great Becontree council estate was built to provide “homes fit for heroes” after the First World War.
In the 20th century Dagenham was virtually synonymous with the Ford motor company, which until recently provided employment for a large number of workers. It was also known for the Dagenham Girl Pipers, a bagpipe marching band set up by an eccentric Congregational church minister in the 1930s that continues to entertain people to this day. You can see them in the small museum cinema that screens a rotating series of films created by the Dagenham Cooperative Film Society, which highlight life on the Becontree Estate.
The nearby Valence Park, a fragment of the original estate, contains a children’s playground while the museum grounds boast a beautiful herb garden that also includes a restored Anderson air-raid shelter from the Second World War as well as a bookshop, café and archive collection for students and scholars of all ages.  Valence House, like many estates in Essex, was moated and the building is still surrounded by most of the ancient water course, a haven for ducks and the local Becmain Angling Club!
Valence House is not the easiest to find if you don’t know your way around the estate so take a map with you. The nearest stations are Chadwell Heath and Dagenham Heathway but they are both a 20 minutes walk away from the park. Admission is free and the museum is open daily from 10am to 4pm, apart from Sundays at:

Posted by london communists at 2:43 PM