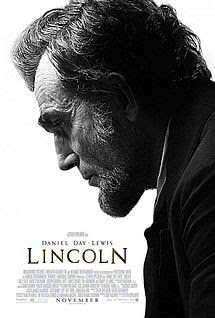 LINCOLN  the film was produced and directed by Steven Spielberg; starring  Daniel Day Lewis as Abraham Lincoln, Sally Fields as his wife Mary Todd Lincoln and Tommy Lee Jones as Thaddeus Stephens. It was based on the book Team of Rivals: The Political Genius of Abraham Lincoln by Doris Kearns.
I had read that John Logan had initially been signed to write the script and that the film would focus on the friendship between Abraham Lincoln and Frederick Douglass, the Black emancipator, social reformer, orator, writer and statesman but that Spielberg had demanded at least two rewrites using other script writers. So I went to see this film with trepidation that it was simply going to be a portrayal of the myth of Lincoln as the great altruistic emancipator and I was not wrong.
The film depicts the struggle of Lincoln to get the Thirteenth Amendment – the one that abolished slavery forever – through the House of Congress. Lincoln has just been elected to a second term as President of the United States and he needs to get this Bill through quickly. The civil war is drawing to a close and soon the southern states will once again be represented in Congress and they with the help of the Democrats certainly block this Bill forever and the civil war will have been fought for nothing.
You could argue that Lincoln is driven purely by moral and altruistic motives – as portrayed in the film. But a cynic might argue that there were other motives; abolition would destroy the economic and political power of the South forever. The film did not explore this angle.
The biggest travesty of the film is that it makes no mention of the long hard struggle of the abolitionists and of freed slaves – people like Harriet Tubman and Frederick Douglass – to put pressure on Lincoln and his government to support the emancipation of slaves.
The only abolitionist portrayed in the film is Thaddeus Stephens, played by Tommy Lee Jones. He was a Pennsylvania Congressman, a radical Republican from a working class immigrant background who campaigned not only for abolition of slavery but also for black and female suffrage.
But you can tell this is a white, middle class film because Lincoln leans heavily on Stephens to drop his demands for black and female suffrage because this would be a step too far for the Conservative Republicans and wavering  Democrat Congressmen whose support they desperately need to get the Bill through. The message is that social advance can only come through middle class compromise and the benevolence of those in power.
The role of the slaves in emancipating themselves, fighting in the civil war and their political campaigning is almost completely missed out.
The film does show Lincoln in a couple of conversations with black people where they talk one-to-one with Lincoln with regard to the abolition of slavery. One is a corporal, Ira Clark, played by David Oyewolo, who argues that there should be Black army officers and black suffrage. The other is Elizabeth Keckley, played by Gloria Reuben, a former slave who is Mary Lincoln’s dressmaker.
There is no mention of the level of organised political pressure from people like Tubman and Douglass to persuade Lincoln to adopt abolitionism. Some historians report that prior to the civil war Lincoln would have done a deal with the South to keep slavery if they would not secede from the Union.
This is a feel-good movie for the white, liberal middle class sit-in-their-house anti-racists, convincing them social change can only be effected by altruistic powerful political figures and totally ignores the role of mass movements and campaigns.
I wonder if the script changes were influenced by the myth in Hollywood, and on mainstream US television channels, that white audiences in the US will not go to see films with strong leading Black stars and predominantly Black cast.  The acting in Lincoln was superb, especially from Daniel Day Lewis and there was a lot of typical Spielberg schmaltz with Lincoln and his relationship with Mary and their two sons that does nothing to enhance the plot even though the actors playing his sons do a very good job.
Spielberg has said that the film has sparked a lot of interest in the period of American history and has said he will send 45,000 DVD copies of it to American schools along with special learning packs. If these also fail to include any mention of the real struggle for emancipation and the role of the Black slaves themselves and other activists, there is a danger that these people could be written out of history for most of the American public.
Lincoln (12A) is on general release
Posted by london communists at 5:50 AM