Searchlight: The magazine they couldn't ban 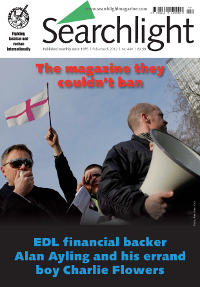 FEW ON the left, or indeed the extreme right, will have not heard of Searchlight. Back in 1975 when the National Front and their skinhead gangs were trying to kick their way to power Searchlight magazine was launched to expose the racist and neo-Nazi movements that were inciting racist violence on the streets. In the 1970s a number of anti-fascist movements rose to the challenge including the Anti-Nazi League and the Campaign Against Racism and Fascism (CARF). They have come and gone, much like the National Front. But Searchlight has continued to expose racist lies and the neo-Nazis who orchestrate their hate campaigns.
A few years ago Searchlight launched Hope not Hate, a broad-based campaign that successfully mobilised unions, Labour politicians and the glitterati against the British National Party (BNP) and the English Defence League (EDL) in a campaign that played a major part in the BNP’s defeat at the last local elections.
Sadly Searchlight and Hope not Hate have now parted company following an acrimonious row between the editor and the magazine’s founder, Gerry Gable, over the running of the magazine.
Though there was clearly a clash of personalities the row clearly reflected concern in the Searchlight corner that Hope not Hate was embracing an exclusively “New Labour” perspective that could seriously jeopardise efforts to sustain the broad campaign needed to counter the BNP and the growing menace of the EDL.
While the departure of the editor and a number of key writers, late last year, caused some minor delays, no monthly edition of Searchlight was lost, though recent editions were delayed and the most recent edition covers both February and March. But now the magazine is back on track packed with articles and investigations into the murky world of racism and fascism in Britain and around the world. It reports on the latest divisions within the BNP, the publishing networks of the “New Right” and carries detailed reports on race crime in Britain as well as a useful round-up on developments in the rest of Europe and the United States.
Movements like Hope not Hate and Unite Against Fascism, as well as numerous local campaigns up and down the country, all have an important role in struggle to keep hate off our streets. But one of the vital roles of Searchlight over the years has been to expose the hidden agenda of the people leading the attempt to spread racism amongst working people in the name of a bogus “British nationalism”. They’re wolves in sheep’s clothing posing as racists when they are really neo-Nazis, who privately do little to mask their hatred of Jews or their admiration of Adolf Hitler and the Third Reich.
Every month, for 37 years, Searchlight has exposed the far right in Britain and abroad. It carries out investigations, reports on fascist activity and supports community-based anti-fascist organisations. It is the first port of call for activists, academics and journalists. Check it out yourself by ordering a copy from your local bookshop or send £24 for an annual subscription to: Searchlight, PO Box 1576, Ilford IG5 ONG.
Posted by london communists at 9:44 AM