How the East wasn’t won 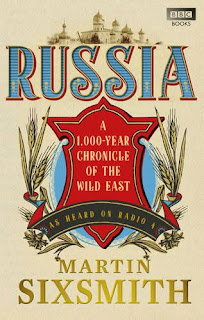 In August 1991 I was unemployed, little more than a teenager and living in a flat above a newsagent. One morning I woke to the news that a coup was taking place against the traitorous Soviet leader Mikhail Gorbachov. On realising what was going on I was ecstatic with joy. Meanwhile in Moscow someone from a more privileged background was covering the same events. That person was Martin Sixsmith, the BBC’s Moscow Correspondent.
In this book first published in 2011 he regurgitates numerous reactionary misconceptions about that country and its people. According to Sixsmith Russians are not proper Europeans; pointing out that for around two hundred years (1237 - 1480) Russia lived under the Mongols as part of what came to be known as the Khanate of the Golden Horde. He makes childish references to Lenin having slanted shaped eyes as evidence of some possible Mongolian heritage. Imagine the (totally justified) outcry if a writer was to make reference to another ethnic group having hooked shaped noses.
The section on Ivan the Terrible (1533-85) shows how similar Russia is to western Europe. Ivan was a tyrannical absolute monarch; however, the sixteenth century also saw the growth of absolute monarchy across Europe. The period saw the rise of the Tudor dynasty in England; with Henry VIII executing two of his wives and two chief ministers, not to mention numerous lesser people. Absolute monarchies were also established in Spain and France.
On reading about various false claimants to the Russian throne, the so-called ‘False Dimitris’ in the early seventeenth century I was reminded of the false claimants to Henry VII’s throne namely Perkin Warbeck and Lambert Simnel. The only difference with Russia was that absolute monarchy lasted longer than in most of western Europe.
Sixsmith shows his real ignorance when it comes to the Soviet era. He makes the nonsensical claim that during the Stalin era as many as sixty million people lost their lives as a result of the Soviet government’s policies. But he can’t explain how the population of the Soviet Union managed to increase by around fifty million in that period. A death toll of this magnitude would not only have led to a population decrease but would have also caused a massive birth deficit resulting a population decline. Whatever the rights and wrongs of Joseph Stalin; when he took the helm of the Soviet Union after the civil war it was in ruins. He left a superpower on the verge of space exploration.
Meanwhile Sixsmith praises Margaret Thatcher and Ronald Reagan as champions of human rights. No concern for the victims of Latin American death squads and striking British miners. When I thought he couldn’t stoop any lower, Sixsmith praises the Soviet traitor Andrey Vlasov, who fought for Hitler in World War II. Maybe his next book will be an attempt to rehabilitate William Joyce, the British fascist dubbed “Lord Haw Haw” who went to Germany to broadcast Nazi propaganda during the war who was hanged in 1946 for treason.
The later chapters cover the period from the rise of Gorbachev to the present day. Sixsmith says he was excited in the early days of Perestroika when entrepreneurs were setting up small taxi firms, restaurants and bakeries. However, he is now disappointed that the Russian economy is dominated by oligarchs. It was at this point when I stopped being angry and started laughing. Capitalism is not about individuals setting up restaurants and taxi firms; it is about a drive toward monopoly which inevitably results in an economy dominated by yes, oligarchs, who are not unique to Russia. You only have to watch the TV series The Apprentice, where the highlight of the show is an oligarch telling twenty somethings that they are fired.
I do not approve of book burning and nor do I believe does this newspaper; however, with rising energy costs and the need to make ends meet…needs must.

Posted by london communists at 3:23 PM