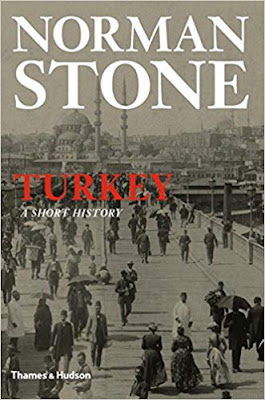 The Ottoman Empire effectively lasted from the capture of Constantinople in 1453 until the establishment of the Turkish Republic in 1923. The same period in English history would have begun during the Wars of the Roses and ended almost with the first Labour Government; in other words, from Henry VI to Arthur Henderson. The book gives a number of reasons why the empire lasted this long.
But the history of the Turks long pre-dates the final days of the Byzantine empire. They were part of a number of tribal, nomadic groups that originated in Central Asia and at times held sway over the vast area between western Europe and China. This area, across which lay the trade routes that linked the Eurasian land mass, was highly lucrative. Many of these nomadic groups, which included the Mongols, Tartars and of course the Turks, captured these areas, adapted themselves to the customs of the region as well as establishing their own empires. These included the Mongol Empire of Genghis Khan, the empire of Tamerlane the Great, the Indian Moghul Empire, as well as the Seljuk and Ottoman Turks, and may even go back as far as the Achaemenid Persian Empire.
According to Professor Stone, a conservative Oxbridge don who now heads the Department of International Relations at a private university in Turkey, the Ottoman system of rule was less repressive than European feudalism. This may on the one hand provide a clue as to why the Ottoman Empire lasted so long whilst on the other it may provide a reason for its ultimate weakness.
It did not see social upheavals on a par with Western Europe, such as the English Peasants’ Revolt of 1381, the Peasants War in Germany, the English Revolution in the 1640s and the French Revolution of 1789. Events like these are engines of social change and take societies forward.
The Ottoman Empire was to a large extent a military empire. It had a standing army based on elite units called janissaries whilst other European states were using conscripts and mercenaries.
It was able to make full use of artillery, long before many contemporary societies. For instance, military historians often talk about the role of the long-bow in the English victory at Agincourt in 1415; around the same time the Ottoman army besieged Constantinople using cannon.
As a result, it was able to control at its height an area from the Atlantic Ocean to India and at various times threatening the borders of Hungary and Austria. The Ottoman advance in the 16th and 17th centuries could also be attributed to both the schism in the Christian world at the time as well as rivalries between European nations. Elizabeth I was keen to strengthen ties between England and the Turks as a counter balance to her rival Spain.
Many European Protestants actually saw Islam as no worse than Catholicism and, in some circumstances, even preferable to the rule of Rome. Whether Shakespeare’s {Othello} really was intended to celebrate the friendship between Elizabethan England and the Ottoman empire is a matter for debate. But in mentioning these points, Stone further demolishes the ‘Clash of Civilisations’ thesis put forward by Samuel Huntington at the end the Cold War.
In his book, Stone shows an understanding of linguistics when he explains the origins of certain Turkish words that have passed into English such as tulip, which is a derivation of the word turban.
Obviously Stone concentrates on Turkish, which he says has more in common with Chinese or even Japanese. Meanwhile he also points out that because of the complexities of the German language, Kant is taught in English to students in Berlin.
Stone plots the gradual decline of the Ottoman Empire through the 17th and 18th Centuries. Arguably it only lasted for so long as a means of preserving the power balance in the region. Russia wanted to eat away its territories from the north whilst Austria–Hungary coveted the Balkans.
Britain and France were concerned about the encroaching power of Russia, and wanted to protect the trade routes and keep Russia out of the Mediterranean. As a result, they were willing to prop up the Ottoman empire that by the 19th century was openly being called the Sick Man of Europe.
The last three chapters of the book cover the collapse of the Ottoman Empire following its defeat in the First World War and the establishment of the Turkish Republic; which was proclaimed by Kemal Ataturk on 28th October 1923. Unfortunately, this is where Stone’s view of Turkish history becomes problematic. He can arguably be described as a Turcophile, if there is such a thing. For instance, controversially he claims that the Armenian Genocide of 1915 did not go unpunished and there were a number of massacres of Muslins around the same time.
Although there may be some truth in this I do take issue with his defence of the present Turkish regime, though this is perhaps not surprising given Stone’s past admiration of Margaret Thatcher.
Today’s government of Recep Tayyip Erdoğan is a combination of reactionary Islam, neo-liberalism and fascism. From reading the book I was able to deduce that the present regime had its origins in the government policies of the 1980s; the military coup of 1980 saw the army increasingly look to the Muslim clergy for support, whilst at the same time the government of Turkut Ozal carried out policies of neo-liberalism supported by the USA.
In a recent tour of UK cities, the Morning Star journalist Steve Sweeney described instances of Kurdish civilians in eastern Turkey being burned alive in underground car parks whilst attempting to call foreign news agencies. Meanwhile the vile ultra-Blairite MP John Woodcock has been denounced as an apologist for Turkish war-crimes after he defended the actions of the reactionary regime as part of a supposed “fight against extremism”.
Posted by london communists at 5:14 AM