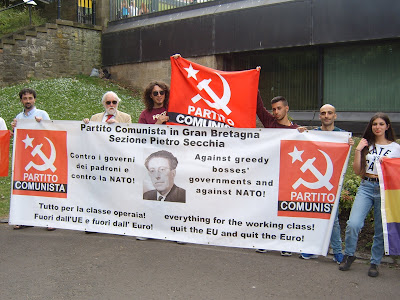 The first Saturday in July saw the British ‘Pietro Secchia’ section of the Communist Party (Italy) hosting a meeting in Edinburgh with the New Communist Party (NCP) and the Communist Party of the Peoples of Spain (PCPE), with the three parties making presentations and a useful exchange of views. Both overseas parties and comrades from the Greek Communist Party are developing work with Edinburgh-based migrants from their countries.
Italy has an unemployment rate of 10.9 per cent and Spain’s rate is worse at 16.1 per cent. Many have therefore come to Scotland in search of work. This work is often in the catering and hospitality industries, where long hours and precarious employment are the order of the day. Many fleeing unemployment at home and who have secured jobs are often simply relieved to have them.
Both parties find that many progressives who sympathetic to their parties are reluctant to become active, but both parties are undaunted in their efforts to alter that and expand their important work.
Alain Fissore of the Italian party stressed that the European Union (EU) had nothing to offer the working classes of Italy and said that the break–up of the EU was needed.
Afterwards comrades headed to the nearby Princes Gardens for a wreath-laying ceremony at the monument to commemorate those volunteers from Edinburgh and the surrounding Lothians who fought against Franco’s fascist army in the Spanish Civil War. A number of passers-by joined in.
Alain also observed that Friedrich Engels, in his early book The Condition of the Working Class in England, noted that Edinburgh had some of the worst houses in Europe. The high-rise houses on the Royal Mile he referred to were formerly inhabited – by the poorest on the ground floor (who often literally shared their rooms with pigs) whilst the rich lived above the smells. When the rich moved to the grander New Town the poor remained before subsequently being shunted off to the council estates around the city.
Today the area is filled with tourist shops selling imported tartan toys and bottles of whisky can be purchased from Sainsbury’s at half-price, but finding a place to buy a pint of milk is difficult.

Posted by london communists at 3:43 AM