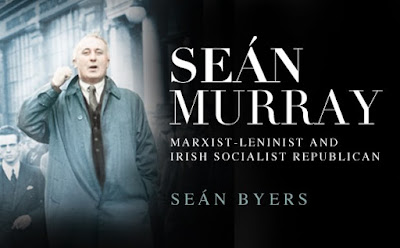 Irish communist history is a painfully neglected subject with very few books on the subject and the Communist Party of Ireland itself has not produced much historical material. The publication of this political biography by Seán Byers therefore fulfils a need. Whether it does this adequately is for the reader to decide.
Seán Murray was the general secretary of the second Communist Party of Ireland (CPI). There have been three parties that took that name, the first being the one led by Roddy Connolly in the early 1920s, then the party founded in 1933, which Seán Murray led, and the third and present party formed in 1970 by a merger of the Irish Workers Party and Communist Party of Northern Ireland.
The question always arises as to why communism is so weak in Ireland, the land of James Connolly, Red Jim Larkin and the great Seán O’Casey. Part of the answer is in the book. Reading between the lines, it becomes very apparent that the CPI functioned a long time as a de facto branch of the British CPGB (Communist Party of Great Britain) and took its cue from them. There were clumsy attempts by CPGB functionaries to apply a crude version 'class against class' line in Ireland, a line that was undoubtedly correct in many European countries where social democracy had held back the revolution and sided with fascism. But it did not really fit in with the realities of Ireland and the CPGB imposed a line of attacking the Irish Republican movement and Fianna Fáil, thereby cutting off the Revolutionary Workers’ Groups (as the CPI was called before its formal foundation in 1933) from a potential  base of support.
Murray himself was from a nationalist background. Born in the north of Ireland he had been an IRA commander during the 1930s, thus providing a link between revolutionary Irish communism and Irish republicanism. Murray tried to work within the Irish Republican Congress, a left-leaning Irish Republican body, but this split in the 1930s. Byers speculates on whether there was CPGB animosity towards Murray and a finger is pointed at the renowned CPGB leader Harry Pollitt.
Apart from unwanted interference from the British CPGB, Irish communists faced other problems. There was repression of communists on both sides of the Irish border. Seán Murray for a long time was prevented by the British authorities from returning to his native north of Ireland. In the Irish Free State, as the Republic of Ireland was called in those days, communists had to face the insane and pathological hostility of the Catholic Church as well as an attempt to create a fascist party in the form of the dreaded Blueshirts.
Sadly the CPI liquidated itself in the early 1940s. One of the numerous weaknesses of this work is that this is never really explained, although it is hinted that the CPGB might have had something to do with it.
Communists in the north of Ireland formed the Communist Party of Northern Ireland (CPNI). Seán Murray was allowed to return to the occupied north of Ireland and became one of the leaders of the CPNI, a party with an extremely dubious stance on the Irish national question.
Later Michael O'Riordan was able to reform the party in the south as the Irish Workers League. The CPNI basically supported the Northern Ireland Labour Party and adopted its own version of the infamous British Road to Socialism. Byers does not explain the apparent about-face of Murray, a former IRA officer who ended up condemning the 1950s IRA border campaign.
Basically, it is probably not an exaggeration to say that the CPNI had an anti-Republican position. The CPNI/CPI’s “peaceful road” theories and insistence on non-violence cost them dearly as they became marginalised during the more recent Troubles. They never had their own paramilitary organisation and were seen as irrelevant by the masses of people in Ireland.
The book is  full of dodgy references to "Stalinism". Byers is very approving of Khrushchev’s denunciation of Stalin and airbrushes out any mention of Irish communist and anti-revisionist Hamilton Neil Goold-Verschoyle who defended Stalin.
Generally the book has a depressing and negative tone, with several references to Murray’s apparent alcohol issues and a portrayal of both Seán Murray and Irish communism as failures.
Despite its weaknesses and negativity, if read critically this book can offer a fascinating insight into the  history of Irish communism from the 1920s up to the early 1960s and has a wealth of material.
Posted by london communists at 9:51 AM