The Bloodier Battle of Valence 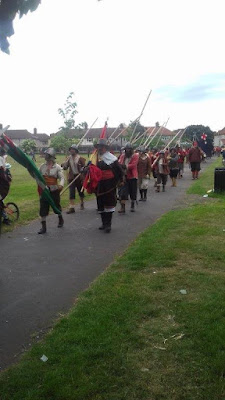 The 17th century came to life in the middle of a council estate in Dagenham last weekend courtesy of the Valence House Museum and the English Civil War Society. The two-day free event in Valence Park included displays of musketry and horsemanship, and a living history camp showing what life was like during the English Civil War. But the highlight was an hour long portrayal of a skirmish between Royalist and Parliamentary troops, which involved over 500 re-enactors on both sides of the civil war.
During the struggle between Parliament and the King, which finally ended with the trial and execution of Charles Stuart in 1649, Valence House was held by the Royalist Fanshawe family. But most of the people in this part of south Essex were staunchly for Parliament throughout the civil war. It’s a pity that this was not reflected in this imaginary battle in which the Royalists were depicted as the victors. But this was entertainment – not an open-air lecture on the nuances of 17th century politics. The grown-ups filmed the costumed drama and kept the beer tent going. The kids were predictably more attracted to the burger and ice-cream stalls outside the historic moated manor house that goes back to the 13th century!
Posted by london communists at 3:03 AM