Chavez and the Bolivarian Revolution 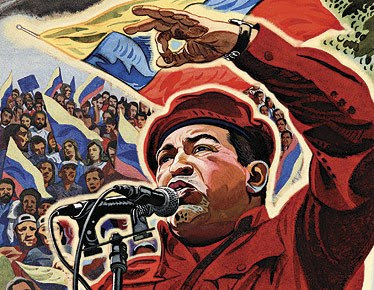 In 1958 -a year before Castro's victory in Cuba- radical elements in the Venezuelan military, based in Maracay, staged a revolt.  There was also rioting in the capital Caracas.  When a left wing Patriotic Junta appealed for a General Strike the dictator Marcos Perez Jiminez resigned.  But when the dust settled it was Romulo Betancourt and his US backed Accion Democratica party that held the reins of power.
Indeed Venezuela soon came to be run -like neighbouring Colombia- on the basis of a two party carve up.  Under the so-called Pact of Punto Fijo (1958) Accion Democratica had the hegemonic, dominant role but it would alternate periodically with the Christian Democratic Party, COPEI.  Other parties, of both left and right, would effectively be precluded from power. Many left wing Venezuelans followed the example of the Cuban revolution, took to the hills and launched a guerrilla insurrection that endured until the late 60's.
In the meantime corrupt politics continued behind the democratic facade.  Carlos Andres Perez in particular had a "penchant for stealing from the state" when he was President from 1974-1979.
Perez returned to power in 1989 and tried to restructure the economy on neo-liberal lines.  When the price of petrol rocketed and bus fares doubled the poor, particularly those who lived in the surrounding shanty towns, descended into the capital city for a week of "indiscriminate looting."  The "unexpected, unorganised rebellion" spread to other towns and cities including Maracay, Valencia, Barquisimeto, Cuidad Guyana and Merida.  Several hundred were killed in the rioting itself and in the repression that followed.
A certain Hugo Chavez had already been organising a Bolivarian Revolutionary Movement within the ranks of the military.  But when the 1989 "Caracazo" occured they were caught unaware.  They simply weren't ready to seize the opportunity!
In February 1992 however Chavez was a commanding officer of a parachute regiment in Maracay.  The planning was now coming to fruition.  Chavez say a chance to overthrow the "corrupt politicians, improve the conditions of the poor and chart a new course" for Venezuela. In the event his attempt to take the Presidential Palace failed (even though the rebellion attracted wide support elsewhere) and Chavez ended up in San Francisco de Yare jail.
But he was out within two years.  Carlos Andres Perez was under house arrest on corruption charges.  And Chavez, with his own political movement -drawing support initially  from progressive military figures, left wing journalists and intellectuals- was able to win a Presidential bid in 1998.
Richard Gott explains in his newly updated book how Chavez has ruled -and been re-elected- since on the basis of his willingness to challenge "globalisation and neo-liberalism."  It is a riveting read.
Posted by london communists at 10:54 AM