The Politics of Literature 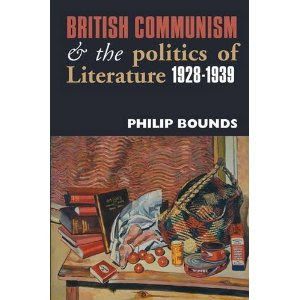 OTHER people’s PhD dissertations seldom make for easy reading and Philip Bounds’ book, based on his thesis submitted to Swansea University in 2003, is no exception. Nevertheless this comprehensive and well-researched study of the role of communist intellectuals during the hey-day of the old Communist Party of Great Britain (CPGB) is a must for all serious students of our movement and the literature that it produced.
The works of three key communist writers – Alick West, Ralph Fox and Christopher Caudwell,  are analysed in depth to demonstrate the impact, one way or the other, of the Soviet Union and the Communist International on the progressive avant-garde during what the writer and former Daily Worker journalist, Claud Cockburn, would later call the “devil’s decade”.
The study begins with the disastrous sectarian “class against class” period, which began in 1928 and carried on until 1934. That was the year when the CPGB began to implement the new Comintern policy of broad alliances and popular fronts. The year 1934 was also when the first Congress of the Union of Soviet Writers was held – a mammoth two weeks of art and ideas  presided over by Maxim Gorky – and adopted the much misunderstood concept of Socialist Realism.
Bounds uses an impressive number of original sources to challenge the conventional Trotskyist and bourgeois academic mantra that communist writers simply echoed whatever was favoured by the Stalin leadership at the time.
The author maintains that, on the whole, the Party intelligentsia were developing a line based on the realities of life in Britain itself. He points out that some challenged the popular view amongst within the CPGB that reduced art to a propaganda tool or another “weapon in the struggle”.  Some said that the cultural front was, in fact, as important as the industrial struggle or any other arena in revolutionary politics.
Alick West, who was an early critic of the revisionist British Road to Socialism, was one of them. West argued that matters were compounded by the fact that communists were so intent on seeing culture as an instrumental force (that is, as something that could be used in the struggle against existing social relations) that they had become virtually incapable of seeing it as an end in itself.
West says: “I said that culture (at a CPGB school on culture in 1953)…heightens our consciousness of the world we want to win and our energy to win it. In this sense it was true that culture is a weapon in the fight for socialism. But the truth depended on the recognition of the greater truth that socialism is a weapon in the fight for culture.
“For our final aim was not the establishment of a political and economic structure, but the heightening of human life. Without this recognition, the slogan became a perversion of the truth, since it degraded culture into a means to a political end. It seemed to me that the political end itself was thereby perverted, and that this was the weakness of The British Road to Socialism…At a meeting of the Cultural Committee, of which I was a member, I said that since the enrichment of human culture was our final aim, the Cultural Committee should have equal standing with the Political Committee in the leadership of the Party. The proposal met with no response, and I said no more.”
Though this study centres on the 1930s it also looks at post-war developments in the British communist movement. A whole chapter is devoted to the efforts to popularise the Marxist analysis of history and the class struggle in Britain down the ages. Historians like A L Morton and Christopher Hill and novelists like Jack Lindsay challenged the received wisdom of bourgeois academia and the Establishment literati and the struggle to counter the bourgeois narrative of British history continues to this day.
The bourgeoisie work constantly to deride anything that doesn’t conform to their own class outlook on the world. Social realism is dismissed as propaganda while those who produce anti-working class novels or drama like George Orwell or the spate of “kitchen-sink” dramatists are hailed as the cutting edge of British literary society.
Marxist historians are dismissed as dogmatists and humanity’s advance is portrayed as culminating in bourgeois democracy. And it’s not just in books or the media. This book makes the point that one of the main functions of the heritage industry is to reinforce the belief that history has somehow come to an end by presenting the past through the medium of museums, stately homes and ruins, to persuade us that significant historical change is now impossible.
But Bounds says: “However anachronistic their politics may otherwise seem, organisations such as the Communist Party, the New Communist Party of Britain and the Communist Party of Great Britain deserve some credit for challenging this curious blend of postmodern pessimism and conservative triumphalism. With their flow of articles on the periods in British history when the class struggle was at its most intense, most of them published in newspapers and magazines whose low production values make them seem anything but remote, they remind us that history has yet to reach its Hegelian terminus and that popular revolt is still one of the main sources of social progress. More than 70 years after the Seventh Congress of the Communist International, Dimitrov’s legacy is still alive – just.”
Whatever we might think about Bound’s conclusions they can be little doubt that this book is an important contribution to the study of the history of the communist movement in Britain and the role of many of its leading intellectuals during its formative years. It can be obtained from any high street bookshop or web-based bookseller.
Posted by london communists at 2:13 PM