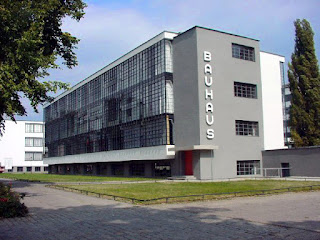 THIS SUMMER the Barbican is holding the first exhibition of Bauhaus in London for over 40 years. The Bauhaus school was founded in Germany in 1919 on Socialist-Utopian ideas and the Arts & Crafts movement – to bring art and technology together. The first school was based in Weimar then moving to Dessau to a purpose-built facility in 1925.
Bauhaus saw play and fun as a starting point for creativity with a collective approach. The school had for that time a very progressive admissions policy, with women being allowed equal entry and in the mid-1920’s the majority of students were under 30 years of age.
Bauhaus covered all forms and mediums – cloth, metal, wood, sculpture, design, photography and performance art such as the famous Triadische Ballet.
The school had a socialist bent and there was a parallel with the Vkhutemas Workshop in the USSR. The school had a communist student cell and its second director from 1928–1930 was the Swiss architect Hannes Meyer who was a member of the German Communist Party.
Meyer undertook the largest Bauhaus commission, which was to design the school for the Federation of German Trade Unions (ADGB) in 1930. Though Meyer, because of his political beliefs, was often overlooked as a Director of Bauhaus by historians when compared to the other two, his contribution was fully acknowledged in the German Democratic Republic in the 1970s.
The school attracted hostility from the right-wing. The Nazis did not approve of the Bauhaus movement, which they dismissed as “degenerate art”. When the Dessau local government fell to the Nazis, the school had to move to Berlin. In an attempt to survive in the changing political climate of the time, the school adopted a non-political outlook, which took away the ideals of the movement.
But was not enough for the Nazis and in 1933 the Gestapo raided the building, resulting in the closure for ever of the Bauhaus school. Many of the Bauhaus masters went abroad and set up new design schools such as in Chicago. That dispersal, following the Nazi closure of the school in Berlin, was to spread the influence of Bauhaus throughout the world.
Bauhaus was an art for life – it brought simplicity and utilitarianism to design; a design that was to last – for those who went to school in the 1950s to 1970s will recognise the Bauhaus chair used in schools. The nesting tables that became popular in the living rooms of the 1970s were a Bauhaus design. The architecture style was to last and influence.
Bauhaus gave a view of modern urban living, with communal design living for the then growing numbers of single urban dwellers and the housing estate, modelled on ideas from the USSR by Meyer, which were a format for the British “Garden Cities”. The Bauhaus gave designs for production and showed a way forward for modern living that if revisited today may provide answers to many of the issues we face, such as housing.
Bauhaus has something to offer today, behind the adoption of its design for fashion and by the wealthy, the Bauhaus movement had fundamental ideas that can be looked at by communists today for ideas and practical solutions.
The full range of the Bauhaus creativity is on display from children’s toys to furniture and is to be recommended.

Bauhaus: Art as Life runs at the Barbican until 12th August. The Barbican Art Gallery is part of the Barbican Centre, Silk Street, London EC2Y 8DS and admission is £10 (when purchased online in advance) or £12 on the door; concessions £6-£8; under-13s free. The gallery is open daily from 11am to 8pm (6 pm on Wednesday) with a late showing until 10pm on Thursday.
Posted by london communists at 2:19 PM