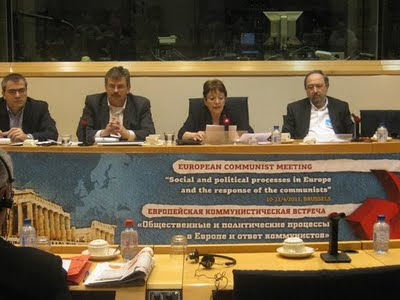 COMMUNIST and workers’ parties from all over Europe met in Brussels on 11th and 12th April to exchange views on the response of the movement to social and political processes across the continent. Representatives of 38 parties from 31 countries, including the New Communist Party of Britain, took part in the conference held in the European Parliament in the Belgian capital. Mirta Castro, head of the Cuban delegation to the European Parliament, ambassador to Belgium and Luxemburg and representative of the Communist Party of Cuba, was also present at the meeting.
The conference was opened by Aleka Papariga, the general secretary of the Communist Party of Greece (KKE), who said that there was now a historic opportunity to direct the thoughts and actions of the peoples in struggle towards working class power.
But she stressed that that even if a pro-people majority in parliament was elected in one country and a government was formed on this basis, it would still not be able to overcome the limits of the basic laws of capitalism if it did not resolve the central issue of the socialisation of the basic means of production, withdrawal from the EU and Nato, nationwide planning and workers’ control from the bottom up.
NCP general secretary Andy Brooks represented the party at the conference and in his intervention he stressed the NCP’s opposition to the imperialist attack on Libya and its support for the massive anti-cuts protest in London last March. He called for mass industrial action against the cuts to build the resistance to the ruling class offensive.
Posted by london communists at 2:23 PM