No to the Lisbon Treaty! 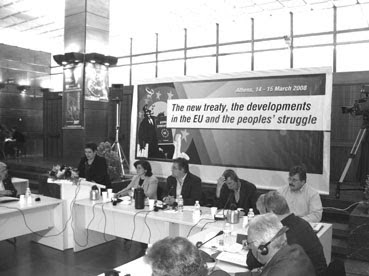 EUROPEAN communist parties called for a mass campaign for a strong No vote against the “Lisbon Treaty” in Ireland and throughout the European Union at a conference in Athens last weekend. Twenty-three communist and workers’ parties, including the New Communist Party of Britain, took part in the conference called to develop joint and co-ordinated initiatives to mobilise the working class against the bourgeois drive to build the capitalist super-state in Europe.
There was broad unanimity amongst the communist representatives from 20 EU member-states and accession countries on the true nature of the European Union. They stressed that the development of the Common Market and the EU that followed was the choice of European imperialism and western European monopoly capital.
It promotes neo-liberal measures favouring the monopolies and the concentration and accumulation of capital. It cannot represent a genuine counterweight to the United States in favour of the people. With the Lisbon Treaty, new steps are being taken towards the configuration of the EU as an imperialist, economic, political and military bloc contrary to the interests of the workers and the people.
The sovereignty and independence of peoples and countries are being further undermined. The attack on labour and trade union rights throughout the EU is escalating in the name of “modernisation”; “competitiveness” and “flexicurity”, and in order to ensure the profits of capital. The participants vehemently denounced the adoption of the Treaty without consulting the people.
The unilateral secession of Kosovo from Serbia was condemned and concern was expressed about its consequences.
Leading members of the revisionist and left social-democratic “European Party of the Left” bloc, like the French Communist Party and the Italian Communist Refoundation Party, did not take part in the conference though others including the Communist Party of Spain (PCE) fully participated in support of the communist initiative.
The guest of honour was the Cuban ambassador to Greece and two anti-European Marxist-Leninist movements, the Pole of Communist Renaissaince in France (PRCF) and the L’Ernesto magazine from Italy attended as observers.
NCP leader Andy Brooks and Theo Russell from the Central Committee represented the Party in Athens. In his speech Andy Brooks called for mass support for a No vote in Ireland, the only country that is putting the Lisbon Treaty to referendum. He said: “Communists must also use the opportunity of the public debate that will no doubt take place prior to the vote to make the principled stand against the European Union and the Treaty of Rome altogether…the European Union cannot be reformed except by tearing up the Treaty of Rome, which established the Common Market in the first place”.
photo: KKE General Secretary Aleka Papariga opening conference
Posted by london communists at 9:19 AM