International Womens Day -- dedicated to the women of Palestine 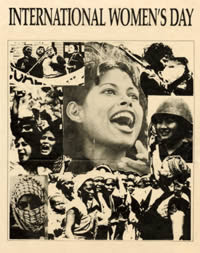 On March 8, 1857 the women workers in textile indurstries of New York were on strike demanding ten hours of work instead of sixteen. Their strike ended by bloodshed.

Today, in all capitalist countries, the working woman is the object of harsh exploitation. She works mainly in part-time, uninsured, and temporary jobs. She is being paid less than what men are paid. She has a smaller pension. She is the first to become unemployed. In many countries violence against women is on the rise, prostitution is spreading, economic migration is separating many mothers from their children and deprives them of the right to education, to cultural activity, to free time. All these are consequences of the so-called globalization, that is, of the renewed and expanded aggression of the monopolies and transnationals against the peoples.
According to the European Union statistical data (Eurostat), today 1.2 billion of the world's 2.9 billion workers are women (40%). Women are 60 % of the world's working poor people. More women than ever before are unemployed and they are mostly stuck in low productivity jobs such as agriculture, the field of services and the informal sector. The two-thirds of the 800 million illiterate people globally today are women. Among the children that do not attend school, 3 out of 5 are girls. The data also reveal that around one million people annually fall victim to sex trafficking, 900 thousand of whom are women and girls.
The conditions for women are extremely bad in all continents. In Africa, AIDS is spreading among the female population, in India around two thousand pregnancies are being prematurely terminated daily, because families wish to have only male offspring. Around ninety percent of the victims of the armed confrontations and wars are non-combatants, among them the large majority women and children.

The data and the numbers speak for themselves. They reveal the true picture of the so-called “female issue” which is a social phenomenon linked to the historical progression of human society and includes a multitude of economic, political and cultural discriminations against women in all spheres of social, family and personal life. These discriminations have mental, cultural and moral repercussions, since women are prevented from developing their abilities in full and from attaining full equality. These negative repercussions concern the women of the working class, of the poor peasantry and of the self-employed strata.

For the W.F.T.U. the solution and the way-out is found in the common struggles of women and men against the social system which gives birth to the exploitation of men by men. We have the duty to fight in political and trade union level for the small and bigger problems until the deliberation of the working class.

The attention and the interest of the W.F.T.U. for the issues of working women is interpreted in concrete actions such as the constitution of a permanent Working Committee composed of members representing different regions, development of trade union skills and training programs on gender equality at the workplaces, strengthening the capacity of class-oriented trade unions so as to include gender issues in their collective bargaining, to inform working women about their legitimate rights and help them assure those rights, including legal assistance when presenting claims on violations of the working women's rights and in the supervision of ILO Conventions, to promote the ratification and implementation of labor standards relevant to gender equality, particularly the No. 100 on equal remuneration, No.111 on non discrimination in employment and occupation, No.156 on workers with family responsibilities, No.183 on maternity protection, to promote the occupational, health and safety measures for the women workers, to struggle for increase of women's participation in trade unions, and also their elections as trade union leaders, to fight again sexual harassment or violence against women and other.
On the International Women’s Day 2008, the W.F.T.U. calls upon all women militants of the world to act jointly with men inside trade unions, to resist the capitalist globalisation, the imperialist wars and the destruction of the environment and to demand trade union and democratic freedoms.
The W.F.T.U. dedicates this year’s Women’s Day to the women of Palestine, to the mothers of Gaza, to the girls in Ramalha who are facing today new barbarian attacks from the Israeli army.

Let’s express all together our Internationalist solidarity to the women of Palestine and to their heroic struggles.
The Secretariat