Another romp in the jungle 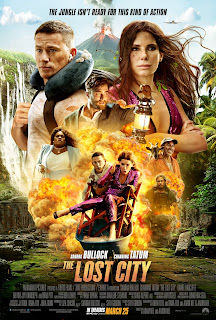 
The Lost City could best be described as {Jumanji} for the middle-aged with strong similarities to the Romancing the Stone franchise of the 1980s. In both cases the writer becomes the hero; effectively taking part in their own adventure. Parallels also exist when in both cases a romance takes place between the writer/heroine and an action hero.
Sandra Bullock, whom I have to say looks rather good for 57, plays lonely bestselling novelist Loretta Sage. Meanwhile, Daniel Radcliffe plays Abigail Fairfax – a rather one-dimensional British villain who hopes to use Sage’s linguistic skills to find hidden treasure. The choice of a British villain may be indicative of the way the current Biden administration views Britain under Boris Johnson. They have never forgiven Johnson for his close relationship with Donald Trump and were not that keen on Britain leaving the European Union.
In The Lost City Sage gets up close and personal with dim-witted cover model Alan Caprison (played by Channing Tatum). As the adventure unravels however, it appears that Caprison is not as dim-witted and shallow as he first appears.
The film raises the issue of can anyone become an action hero if forced to by necessity, with both lead characters using their initiative to avoid capture. The two lead actors work remarkably well together, with a high-quality dialogue and a number of unexpected scenes keeping the audience focused.
As with the Jumanji franchise, it views the world through an American prism, seeing the rest of the world as some kind of computer game. The film is set off the coast of Africa with the local population as little more than extras. This is however, where there were missed opportunities for the story to develop. Namely one of Fairfax’s henchmen, who it turns out only works for him due to lack of job prospects, on his being unwilling to do his bidding.
Although the storyline is not original, re-hashing an old idea that worked in its day does not always make it bad. Let’s face it, Romancing the Stone was a successful film and there was also an enjoyable sequel the Jewel of the Nile that did almost as well at the box office. The acting is convincing, and the story is mostly harmless but with missed opportunities. As a result, {The Lost City} is best seen as an upper-end B-Movie with slightly above average dialogue.

Posted by london communists at 4:33 PM