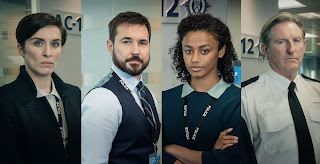 In a recent television drama, a serving police officer murders a woman and dumps her body in a sack. The officer had previously been accused of indecent exposure, although seemingly trivial this often leads to more serious sex offences and even murder. His fellow officers do nothing about it and try to cover it up. A group of women organise a vigil to remember the dead woman and are attacked by the police. Just rewind for a second – this is not a television drama but real life.
It is ironic that the BBC have produced a television drama on the subject of police corruption; namely the long-awaited Series Six of Line of Duty. The success of the drama is its constant ability to keep the viewer wondering about the identity of a mysterious character only known as ‘H’.
The series revolves around three untouchables who work for a department know as Anti-corruption 12(AC12). They are the Gaffer, Superintendent Ted Hastings (played by Adrian Dunbar), Detective Sergeant Steve Arnot (played by Martin Compson) and Detective Inspector Kate Fleming (played by Vicky McClure).
Like all untouchables they live dysfunctional lives; unable to form or keep relationships and often estranged from wives and family. On numerous occasions throughout the series the viewer has been asked to pose the question of whether these three are as untouchable as they appear. In Series Five it almost looks like Hasting is the elusive H.
Over the previous five series the trio have uncovered corruption, murders, rape, collusion with criminals and paedophilia within the police force – the sort of thing that only happens in real life.
The police force in this country is known for its institutional racism, corruption and complete incompetence. In 2019 a number of police officers in Basingstoke were recorded making racist comments and ridiculing victims of crime. Although they were dismissed from the Hampshire Police such attitudes were only the tip of the iceberg; the officers concerned were simply stupid enough to get caught.
Series Six starts with Fleming having left AC12 and a bored Arnott trying to find work elsewhere in the force. After the murder of an investigative journalist and evidence that Fleming’s boss is up to no good AC12 tries to use her as an undercover asset. However, Fleming has divided loyalties. AC12 once again find themselves up against a secretive cabal of bad apples; a common theme of many recent conspiracy theorists.
The idea of a deep state conspiracy was is a feature of Trumpian conspiracy theories such as those put forward by the likes of QAnon. But such theories contain an element of truth. The concept of the deep state, although misused by the far-right, emanates from the Marxist-Leninist theory of the state as an instrument of class rule. What separates this from the conspiracy theorists of the far-right is that change comes from ending the rule of the capitalist class – not by voting for an anti-elite demagogue, who is himself a member the elite or through the action of a few untouchables. The state including the police exist to serve the interests of the ruling class; there is no conspiracy about it.

Posted by london communists at 3:43 AM