A Tory drama for today 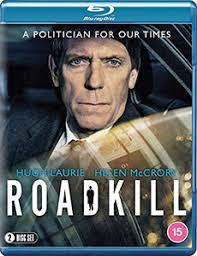 In few political dramas does the Prime Minister state their allegiance. Roadkill, the BBC’s latest Sunday Night political drama, is an exception, where Prime Minister Dawn Ellison (played by Helen McCrory) openly states she is a Conservative. This is perhaps not surprising because its creator, the veteran playwright David Hare, has never shied away from the theme of contemporary politics in his dramas.
Hugh Laurie plays the up and coming Cabinet Minister Peter Lawrence. Laurie has come a long way since the nineties, where he was typecast as playing well-off thick people; notably Bertie Wooster in Jeeves and Wooster and the Prince Regent in Blackadder. Recently Laurie has successfully played a number of serious multifaceted characters, such as the arms dealer Richard Roper in John Le Carre’s The Night Manager.
Television drama reflects reality. Also, politicians, and for that matter ordinary mortals, have skeletons in their cupboards. This includes having had sex with people they were not married to – tell me something I don’t know! In Roadkill, however, Dawn Ellison takes a very high-handed view. Against Lawrence at least, who has some very big, as yet undecomposed, skeletons in several cupboards.
The Great Offices of State, in this country are Prime Minister, Foreign Secretary, Chancellor of the Exchequer and Home Secretary. Which is why Lawrence is disappointed when offered the post of Justice Secretary. Like all politicians Lawrence wants to be Foreign Secretary when in fact he’s after the premiership. As a result, the Prime Minister sees him as a threat and uses his skeletons against him.
Roadkill also plays into myths the establishment would like us to believe. Lawrence is a ‘man of the people’, who allegedly worked his way up from humble origins. Due the warped right-wing narrative however, being a ‘man of the people’ goes hand in hand with being an NHS-privatising, Trump supporting neo-con.
Being left-wing, on the other hand, means coming from Hampstead, frequenting dinner parties and supporting the European Union , a narrative with its origins in the Brexit debate. A debate from which the real left, who have no time for NHS privatisation or the EU’s neo-liberal, imperialist trading bloc were largely excluded. Lawrence also has a slot on “AlltalkRadio”, intended to be a parody of the far-right radio station TalkRadio that regularly parrots nonsense about the upper-class being an oppressed minority. They also delve into comedy however, when they call the fake-left dilettante Owen Jones a Stalinist.
The drama also touches on some of the contradictions within conservatism. There has always been a conflict between those who simply want to preserve the status quo and whose mindset is based on nostalgia, whilst on the other hand there are those who believe in the marketisation of every possible area of society including the Health Service. Peter Lawrence is very much of the later persuasion. A few years ago, Tories in Winchester were divided over the sale of the local bus station; the discussion, which I understand may have involved an element of corruption, resulted in a local Tory finding himself in a mental health facility. Will Lawrence experience the same fate – it couldn’t happen to a nicer bloke.

Posted by london communists at 11:39 AM