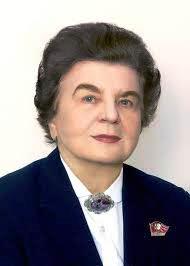 Nina Alexandrovna Andreyeva has passed away in St Petersburg, the city known as Leningrad during the Soviet era. The leader of the All-Union Communist Party of Bolsheviks (AUCPB) died on 24th July 2020 after a long illness.
Nina Andreyeva helped revive the Russian communist movement during the chaos that followed the destruction of the Soviet Union and although her party was always overshadowed by the mainstream successors to the old Communist Party of the Soviet Union, her views helped change the public perception of the Stalin leadership in Russia and throughout the world communist movement.
Nina Andreyeva was born on 12th October 1938 in a working-class family in Leningrad. During the Second World War she lost her father, who was killed in action in 1941.
She graduated from high school with a gold medal with honours from the Leningrad Institute of Technology in the technical sciences. In 1966, she joined the Communist Party of the Soviet Union (CPSU). As an honest party member, she always took a firm principled stand. For this, the bureaucracy twice tried to deprive her of her Party card. These were the people who would later burn their Party cards to serve imperialism and join the bourgeois camp.
It was in the midst of Gorbachev's perestroika, when the traitors launched an attack on the foundations of socialism, that Nina Andreyeva showed her firm Bolshevik character in the famous letter I cannot compromise my principles that was published in Sovetskaya Rossiya, the daily newspaper of the Supreme Soviet, on 13th March 1988.
The article became known throughout the Soviet Union and beyond. Nina Andreyeva exposed Gorbachev's treacherous policy and caused such a public outcry that the Politburo of the CPSU, at the request of Gorbachev, spent two days discussing how to deal with her.
Her letter divided society into two camps: the defenders of socialism and those who wanted to destroy everything related to the Soviet period. It sparked a wide public debate and was reprinted in 800 regional and local publications.
It was denounced as "a manifesto of anti-perestroika forces" and Nina Andreyeva was forced to leave her teaching post at the Leningrad Institute of Technology. But she still kept up the fight.
In 1989 Nina Andreyeva led the All-Union ‘Unity for Leninism and Communist Ideals’ movement. In July 1991 she became the leader of the ‘Bolshevik platform’ within the CPSU. And on 8th November 1991, she was elected leader of the All-Union Communist Party of Bolsheviks (AUCPB).
Nina Andreyeva wrote a number of books dedicated to the struggle against opportunism, Zionism and fascism that were published all over the world, whilst calling on the world communist movement to uphold the cause of Lenin and Stalin at seminars in Democratic Korea, India and across the European continent, including the Brussels international May Day communist conference where she met NCP leader Andy Brooks in the early 1990s.
Her party failed to get mass support for its call for a “political general strike” and it was always overshadowed by the two mainstream successors to the old CPSU in the Russian Federation. But Nina Andreyeva’s scientific defence of the Soviet Union and the Stalin leadership led the fight-back that demolished the myths and lies spread by Gorbachov and Yeltsin during the counter-revolution that destroyed the world’s first socialist republic.
She helped shift Russian public consciousness towards renewed appreciation of the achievements of the Stalin era. Stalin’s memory is now upheld by all the communist parties in Russia and the Soviet leader’s achievements are now even partially accepted by the anti-communist Putin regime.
Her life is, perhaps, best summed up in the tribute from the party she founded and led for over 30 years. The AUCPB said that the life-long principles of NA Andreyeva could be summed up by Stalin's words: “Not a step back! This should be our main appeal. We must stubbornly, to the last drop of blood, defend every position ... Our Motherland is going through difficult days. We must stop, and then push back and defeat the enemy, no matter what it takes!”

Posted by london communists at 1:49 PM