A Gem of a Tower 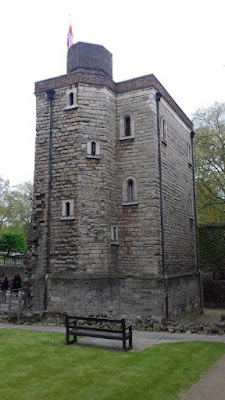 The Palace of Westminster is what we call the Houses of Parliament today. It was originally a feudal royal palace, although little remains from the middle ages apart from Westminster Hall, where Charles Stuart was tried and condemned to death for treason by Parliament in 1649, and a tower that was built around 1365 to house the personal treasure of Edward III.  By the 1600s the Jewel Tower, once part of the wall that surrounded the royal palace gardens, had been reduced to a public records store-room, and it remained an obscure part of the past until it was restored and opened to the public in 1956.
Sadly the moat, which was filled with water between 1963 and the 1990s, has been drained and the Parliamentary history exhibition was closed a few years ago. The Jewel Tower, a World Heritage site, is now run by English Heritage. The current displays include a model of the medieval Palace of Westminster, replicas of precious objects and areas of set dressing, including an 18th-century clerk's office. Whether this justifies the £5 admission charge for non-English Heritage members depends on how keen you are on the medieval period. But entrance to the garden, the small café and bookshop is free, so it’s worth a visit just for that if you’re in the vicinity.
The Jewel Tower is easily missed in the hurly-burly that surrounds the Westminster ‘village’ but it still gets around 30,000 visitors a year, mostly overseas tourists who have come to explore Westminster Abbey and Parliament. It is located on Abingdon Street, opposite the southern end of the Houses of Parliament (Victoria Tower).
Posted by london communists at 3:17 PM