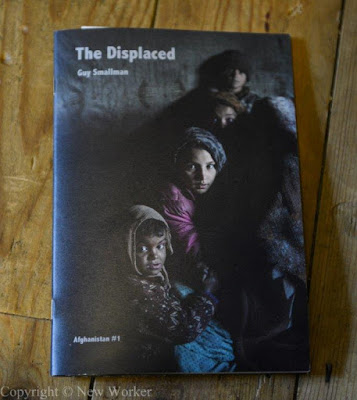 GUY SMALLMAN is a rare kind of photojournalist; he is a freelance who is not sponsored by any of the big media corporations or press barons but he gets to places in the world where there are important stories to be told about the impact of war and conflict on local people’s lives that western governments would prefer were not reported.
He is funded by a group of fellow left-wing journalists known a Reel News, and has been visiting Afghanistan regularly since 2008; he now has a network of friends there.
Guy does not make judgements or long political comments – he lets his camera do the talking and leaves us to make up our minds.
Last Tuesday, he launched a new booklet of stunning photos of “the displaced” – Afghan people who have been forced from their homes by the wars and are refugees in their own country, scraping by from one day to the next on next to nothing.
The biggest killer among them is cold and young children are the most vulnerable. One of the most poignant pictures is of a man carrying the small body of his 18-month old niece, Saiyma Gadazia, to bury her among the graves of other children after she froze to death on the floor of her home in Char-e-Qamba camp last January.
Her father, Safarali Gadazia, an unemployed labourer, had reluctantly moved his family to colder, more polluted Kabul as the Sangin district of Helmand province became intolerable.
Without an ID card he could not get work and would be arrested by the police or army on suspicion of being a “foreign fighter”. If he carried an ID card he risked being detained and beaten by the Taliban as a “government spy”.
Many of the pictures are children playing in the rubble of bombed buildings in Kabul, or huddling round small heaters for warmth.
Conditions are about to get worse as neighbouring Pakistan is carrying out its threat to expel three million Afghan refugees, many of whom have to homes or land to return to.
The book launch in Shoreditch, east London, was packed. Guy made a very short speech and Elsie Bowerman, whose group Voices For Creative Non Violence runs loads of projects for disadvantaged kids in Afghanistan, spoke of the reality of being a woman in modern Afghanistan and the extra difficulties they face in making a living because of the religious restrictions on women going out alone.
Posted by london communists at 7:16 AM