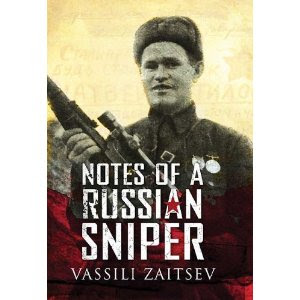 Vassili Zaitsev was the Soviet sniper immortalised by Jude Law in Enemy at the Gates, the  2001 blockbuster movie set during the Battle of Stalingrad with a star-studded cast including Ed Harris as his Nazi counterpart and Bob Hoskins as Nikita Krushchov. Stalingrad has long been used in the West as a symbol of the sacrifice of the Soviet people in the struggle to defeat Nazi Germany in the Second World War. The film is remarkable for the visual power of the gritty battle scenes and realistic recreation of the ruined city. So film-goers could easily be forgiven for thinking that the movie, produced by French director Jean-Jacques Annaud, was an accurate portrayal of Zaitsev’s wartime career.
Far from it. Zaitsev, who died in 1991, would have turned in his grave had he lived to see Enemy at the Gates which depicts him as a barely literate hunter from the Steppes and reduces the Second World War to a sniper duel between two men. But while Zaitsev’s own account of his exploits in Stalingrad had been published in the USSR back in 1956 the first English translation was only published in 2003.
This revised edition published by Frontline Books includes the original introduction by Marshal V I Chuikov and a pithy foreword that demolishes the anti-communist nonsense that is passed off as artistic licence in Annaud film.
As a boy Zaitsev was taught to shoot and hunt in the woods by his family. A dedicated communist he served a pay clerk in the Soviet Pacific Fleet but volunteered to fight in the army when the Germans invaded in 1941. And it was in Stalingrad that his particular skill was recognised. With at least 242 kills to his credit Zaitsev ended up running a sniper school in the city that broke the back of the Wehrmacht.
Library shelves are full of dusty memoirs of generals who portray war in terms of manoeuvres and tactics. This book sees war through the eyes of a rank-and-filer on the front-line in a struggle against a cruel and determined foe.
Though Zaitsev was like the millions of Soviet youth who rallied to the call to defend the Soviet Union his particular skill sets him apart from most other soldiers.
Snipers are a special breed. They shoot to kill in cold blood and without remorse. As Zaitsev says: “As a sniper, I’ve killed more than a few Nazis. I have a passion for observing enemy behaviour. You watch a Nazi officer come out of a bunker, acting all high and mighty, ordering his soldiers every which way, and putting on an air of authority. The officer hasn’t got the slightest idea that he only has seconds to live”.
There’s plenty more of this as Zaitsev tells his story of the fight for Stalingrad which also includes a report of his experiences first published in Moscow in 1943 and Stalin’s famous “Not a Single Step Back!” Order Number 227 of 28th  July 1942.
This is a book well worth reading. Don’t be put off by the publisher’s cover charge. It can be bought for far less on the web or obtained by ordering it from your local library.
Posted by london communists at 3:00 PM