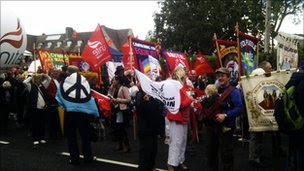 Thousands of trade union and labour movement activists marched through the small Dorset village of Tolpuddle last weekend. They marched behind the banners of the Tolpuddle agricultural branch. Southampton Unite and Unison workers were at the head of the march with their banners shouting the slogan “Cut my pay – no way” a protest against Southampton Council's attempt to cut the pay of it's workers.

The keynote speeches were delivered by TUC General Secretary Brendan Barber, Sharan Burrow, ITUC General Secretary, and Tony Benn. Nigel Costley, South West TUC Secretary set the scene by reminding the rally that “We come here to remember and honour the Tolpuddle Martyrs. We come here to refresh out commitment to what they believed in – Unity, Solidarity, Trade Unionism and we also come to celebrate the fact that protest and campaigns that were waged by the unions then resulted in victory when the government backed down and performed a u-turn. It was possible then and it is possible now.”

Sharan Burrow spoke of the importance to renew our commitment to a decent world, social justice and to the rights of union members. She reminded us that “The crisis that was born of greed, the greed of profits from the bankers and shareholders of those incredible products which had nothing to do with the real economy... It is a crisis that is undermining every community throughout the world. The bankers are forcing governments from Spain, to Portugal, to Greece, the US right through to the poorest countries of the world demanding that people pay with their services, public sector jobs, their very way of life.”

She went on to point out that “The people of Spain are standing up against it, people in Portugal, Romania, in Africa, the US, Asia are standing up to the demands of Conservative governments. It's the time for solidarity, it's the time for a shared commitment to collectivism. Solidarity is about sharing the wealth, building the common good.”

Brendan Barber in speaking about the big challenges that the trade union movement is facing and that the rally was about celebrating what the Tolpuddle stands for said “All these values of solidarity we're going to need that in the months ahead” and asked the rally to send a message of solidarity “to the trade unionists of Southampton, the teachers and trade unionists in the Civil Service who took industrial action on June 30th, to the half million people who marched on the 26th March to tell the government that there is an alternative.

Brendan warned the rally “That we are facing a government that is absolutely committed to cut public spending whatever the consequences but that we know the price is going to be paid by the poorest and weakest for a crisis that was caused by the richest and powerful. The price we risk paying is the loss of hundreds of thousands of jobs, the services we rely on from Sure Start centres to the vital caring services for the elderly and the living standards of just about everyone, with wages held down and inflation let rip and the threat to our pension system.”

He went on to say “We mustn't allow this government to try and divide public and private sector workers” citing the case of pensions where both government and major companies like British Airways were attempting to move pension indexing from RPI to CPI resulting is a 15% reduction in pensions.”

He called upon the movement to win that battle of ideas he pointed out that “Over the last thirty years we've seen the growth of inequality, living standards squeezed, we've seen our economy double in size yet for most ordinary people their earning levels have hardly increased at all.”

In the months ahead he said that there were going to be some major industrial battles to defend decent pensions, pay, living standards and protect jobs and concluded by saying that he was “confident that we will see the return of a Labour government committed to decent values and justice for the British people”

The weekend was more than just the Sunday march and rally there were may stalls from the trade union and solidarity movements. A radical history school dealt with topics such as the poor law, risings against enclosures, transportation including crime and punishment. The Prison Officers Association organised the Tolpuddle Freedom Hike from Dorchester Prison to Tolpuddle to raise monies for the POA Freedom charities. On each of the days from Friday through to Sunday a whole host of musicians and comedians entertained at the event organised by the South West TUC.
Posted by london communists at 1:02 AM