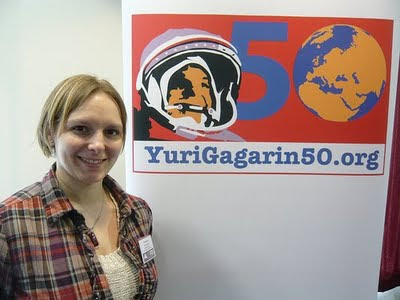 SPACE enthusiasts and scientists from around the world came together last month in a global celebration of the new era of space exploration which began with Yuri Gagarin’s historic flight, on 12th April 1961.
Writers, broadcasters and scientists from Britain were at the forefront of several projects aimed at giving Gagarin’s flight the momentous commemmoration it deserves, and to encourage young people to learn about space exploration and astronomy.
Yuri Gagarin – The First Spaceman is a comic, or graphic novel, style book detailing the flight as it happened, aimed at schoolchildren by Vix Southgate. Vix is an author and illustrator specialising in science-based stories, and also administrator of Yurigagarin50.org, a website promoting Gagarin events around the world.
The book, which combines text and comic strip, recounts that Gagarin was an ordinary boy who witnessed his village being occupied by the German invaders, and grew up to be a skilled worker.
“He grew up as a farm boy and saw the horrors of war. He went to live in Moscow to become better educated and he trained to become a foundryman at a steelworks. He went on to technical school and joined a flying school, later becoming a pilot in the Soviet military. He joined the space programme and became the first man in space.”
Vix’s website (http://www.vixsouthgate.co.uk/) also contains valuable resources designed for school teachers and links to websites Gagarin space exploration and astronomy.
YuriGagarin50.org contains lots of fascinating information about the Russian astronaut, his space flight and his visit to Britain in 1961 and pulls together other people’s memories of the day.
The film First Orbit, launched on YouTube 12th April is a remarkable international collaboration directed by Christopher Riley. It opened on over 1,000 screens around the world in more than 75 countries, including UNESCO HQ in Paris, Boeing HQ in Seattle, and the European Space Agency’s Columbus Control Centre near Munich. It has now been viewed over 2.8 million times on in almost every country on Earth.
The film, which took almost five years to bring together, is a collaboration between the European Space Agency, Roscosmos, Nasa and the ISS.
It combines original footage of Gagarin’s training and flight with film shot by Italian astronaut and photographer Paolo Nespoli from the International Space Station (ISS), matching as closely as possible the orbit followed by Gagarin's Vostok 1 spaceship.
It also uses historic audio recordings of the entire mission, which many thought to be lost, and is probably the first time it has been heard outside of Russia.
The music accompanying the stunning shots of the earth from space was composed by British musician Philip Sheppard, who also wrote the music for the Olympic Handover Ceremony at the 2008 Beijing Olympics.
First Orbit can also be downloaded from the website by anyone applying for permission to show it to a group of people.
The ISS is itself in many ways a continuation of the Soviet space programme, and its full name in the space industry is “ISS-Zarya”. Zarya, “dawn” in Russian, was the first module of the ISS. It was launched in 1998 from the same cosmodrome – the famous Baikonur in Kazakhstan – as Vostok 1.
While the United States has provided most of the funding and built most of the modules, the ISS is a genuine international undertaking involving Russia, the European Space Agency, Japan and Canada. Five of its 15 modules are Russian-built and another, Nauka (Science) is due to be added next year.
The Russian space agency, Roscosmos, regards the ISS as the continuation of a "permanent Soviet human presence in low-Earth orbit", and there can be no doubt that it would have taken many more years to develop without the pioneering work of the Salyut and Mir space stations on long-duration human spaceflight.
While the Soviet Union clearly saw the military potential in developing space flight from the beginning, it also actively pursued the use of space flight for peaceful scientific purposes. Today, 50 years after Gagarin’s flight, Russia and many other countries still oppose the militarisation of space.
One addition to the contributions made by Vix Southgate and First Orbit to the Gagarin celebrations, the play Little Eagles recounts the life of Sergei Korolyev, the extraordinary genius and Chief Designer behind the Soviet space programme. The play, by Rona Munro, is being performed by the Royal Shakespeare Company at the Hampstead Theatre, North London, until 7th May.
The 50th anniversary of Gagarin’s flight not only marks the beginning of a new era in human history, but reminds us of the positive contribution and the peaceful international cooperation still being made possible through the exploration of space. Projects such as First Orbit and Yuri Gagarin – The First Spaceman and Little Eagles are helping to bring those inspiring ideals to a new generation.


photo: Vix Southgate
Posted by london communists at 2:09 AM