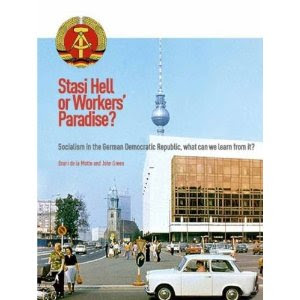 Stasi Hell or Workers' Paradise? by John Green and Bruni de la Motte
£3.50; Paperback; 50pp; illus; Artery Publications, London 2009
THE GERMAN Democratic Republic, with its trade-mark hammer and dividers logo, has long gone. It went the way of all the other European people’s democracies during the counter-revolutionary wave in 1989 that was inspired by traitor Gorbachov and his minions and finally ended with the destruction of the Soviet Union itself. But during its 40 years of existence the GDR overcame diplomatic isolation and economic warfare to build an equitable society, raise living standards and become the leading partner in Comecon, the Soviet counter to the Common Market.
Contrary to imperialist myth German communists never wanted the partition of Germany. Though the defeated Third Reich was divided into Allied Zones of Occupation, the Soviet Union initially expected Britain, France and the United States to keep their word and maintain the territorial integrity of the country. When the imperialists showed their true hand in introducing a separate West German currency and establishing the “Federal Republic” in their zones, the Soviets had no other option but to encourage the development of the GDR in the Soviet Zone of occupied Germany.
Hundreds of thousands of imperialist troops, armed with nuclear weapons remained in West Germany to threaten the Soviet Union and its eastern European allies while the West German authorities claimed authority over what they continued to call the “Soviet Zone” and large chunks of former German territory ceded to Poland by the Allies in 1945. The GDR was diplomatically isolated by the imperialists. That only ended in 1972 when détente led to normalisation between East and West Germany and the admission of both German states to the United Nations.
Throughout this period many British communists and progressives travelled to the GDR, no easy business during the height of the Cold War, and most returned favourably impressed at the efforts of the people’s government efforts in building socialism on German soil. Many became active campaigners in the friendship societies that encouraged tourism in the GDR. Some opted to study at centres of higher education and a few chose to live in the GDR like the co-author of this booklet.
The chief heir to the GDR’s old ruling Socialist Unity Party initially called itself the “Party of Democratic Socialism”. Now it’s simply “The Left” and its East German leaders are in a state of denial, having dumped Leninism long ago in favour of left social democracy to win a few seats in the bourgeois German parliament. British academic interest in the GDR rarely goes beyond the arcania of Cold War studies. When it does it generally focuses on social questions and never attempts to reflect the reality of life in the GDR.
That now exists only in memories of its former citizens and those who crossed the Berlin Wall. The fading books and pamphlets that the GDR published to counter the barrage of lies and abuse from West Germany and its Nato allies are mostly tucked away in personal collections or available only from specialist libraries.
This pamphlet helps redress the balance. It is, of course, a personal view based on the sympathetic experiences of the two authors but whose political stand is perhaps reflected in the reference in the opening pages to the “tyrannical rule of Stalin and the crimes perpetrated by his regime in the name of communism”.
Though it does explain the economic reasons for the building of the Berlin Wall it’s a pity the authors didn’t mention the fact that for every three East Germans lured to the West by the prospect of higher wages at least one West German went East, mainly pensioners who were more favourably treated in Democratic Germany. Nor is there any attempt to describe the problems facing the Communist Party of Germany (KPD) which united with the social-democrats in the Soviet Zone to establish the Socialist Unity Party and was subsequently banned in West Germany in 1956.
Nevertheless this pamphlet is worth buying because of what it does contain especially for the new generation that knows nothing about the history of the GDR or the East German workers’ all-round achievements during its forty years of existence.
Stasi Hell or Workers’ Paradise? can be obtained directly at £4.50 (includes £1.00 post and packing) from: Artery Publications,11 Dorset Rd, London W5 4HU

Posted by london communists at 1:28 PM