Images of the Miners' Struggle 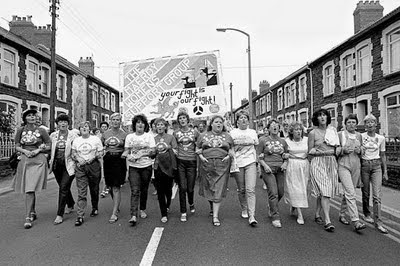 None of us will ever forget the miners’ strike of 1984/85 and snapshots that capture the sacrifice and struggle of the mining communities are now available as greeting cards from Past Pixels, a new venture in publishing images of labour movement history.
The set is a personal selection by the photographer, Martin Shakeshaft, from a collection of sixteen postcards that have already been published. These high quality black and white images remind us of the epic scale of the struggle of the mine workers and their supporters to defend an industry, jobs and communities. The five greeting cards include shots of pickets, marching miners and a cheerful Arthur Scargill cycling down the street in Treorchy in the Rhondda Valley.
Martin Shakeshaft is a well-known photo-journalist and a member of the NUJ and the British Press Photographers’ Association and some of his work is on permanent display in the National Museum of Wales. To celebrate the 25th anniversary of the miners’ strike he revisited some of the locations of his original images which were displayed in a touring exhibition entitled “Look Back in Anger”. These images are featured on the reverse of the greeting cards.

The set of five cards costs £4.00 including postage and packing. Make cheques payable to “Past Pixels” and send to Past Pixels, PO Box 798, Worcester, WR4 4BW. Alternatively you can buy them online via their website.
photo. Maerdy Women's Support Group. Martin Shakeshaft
Posted by london communists at 1:47 PM